A basic guide to the mechanics of the Baldur’s Gate games, for those of you who didn’t play second edition D&D.

This doesn’t matter much, except that it will determine what classes you can play and some small adjustments to your attributes. Human, half-elf, or elf are recommended because they offer the most flexibility (and in BG2 they feature the most romance options). However, dwarves and half-orcs make very good warriors, and halflings make very good thieves. Gnomes are generally strong, and make good multiclassed mages. 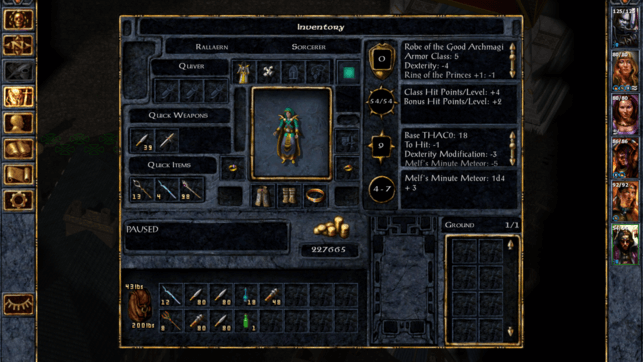 General Note: Certain classes guarantee minimum ability scores in certain areas. Paladins, for example, will always have at least a 17 Charisma. These minimums are not the same as required ability scores, and often do not provide any particular bonuses for that class.

Italicized kits are Enhanced Edition only. 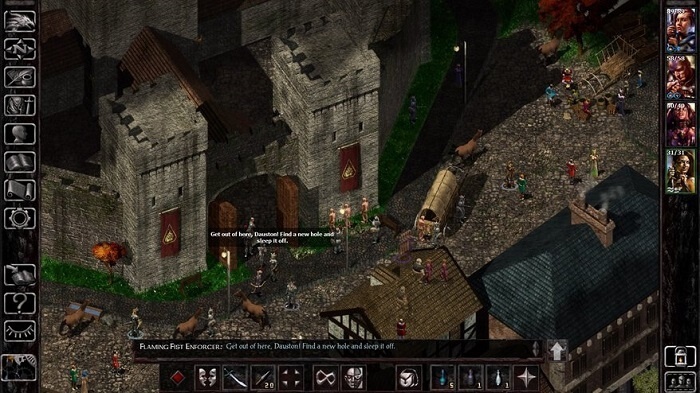 Certain items raise ability scores to set numbers, regardless of the base score. Thus, a certain item might raise a character’s Charisma to 18, whether it starts at 6 or 15 or any other number. These items exist for Charisma, Dexterity, and Strength, so plan accordingly. Strength-increasing items in particular are very common in late-game Baldur’s Gate 2.

The number in the die’s name denotes the maximum number the die could roll, while the minimum is always 1. Thus, a d6 has a possible range of 1-6, while a d12 could be 1-12. When multiple dice of the same type are added, another number is added to the beginning of the notation. Thus, 4d6 is four d6 dice added together, forming a 4-24 range. Modifiers noted at the end, such as +1 or -1, apply a simple number modifier to the final result. Thus, d6+1 would have a range of 2-7, while 2d6-1 would have a range of 1-11.

The “to hit” roll determines whether an attack deals any damage at all. This roll is based on your THAC0 (To Hit Armor Class 0, i.e. the minimum number you need on a virtual d20 to hit an enemy with an armor class of 0), and a lower THAC0 is better. “To hit” rolls, and therefore THAC0, do not affect most spells.

Damage is simply the damage dealt if the attack connects. It’s completely useless if your attack doesn’t hit, but hitting by 1 point is the same as hitting by 20. Higher damage is better. Damage bonuses do not affect most spells, as spell damage is determined by the spell alone.

Armor class makes an attacker’s “to hit” roll less likely to succeed. It does not directly mitigate damage, it only reduces the number of successful hits you’ll take. A lower armor class is better. “To hit” rolls, and therefore armor class, do not affect most spells.

Spell slots are where your usable spells are stored (find them in the Mage Book or Priest Scroll menus). Each slot is equal to a single use of that spell, so if you want to cast a spell multiple times, put the same spell in multiple slots. Spells are restored when you rest. If you want to change your spell setup, you can remove a spell from a slot at any time and replace it with another one. However, this new spell will not be available until you rest.

Learning new spells (wizards and bards only) is achieved by reading magic scrolls (scrolls with spells on them, called “scroll of magic missile” or similar). Right-click on the scroll in the inventory screen and click “scribe scroll” on the scroll description screen. This will destroy the scroll, but it will also teach the spell to the character whose inventory the scroll was in. This process has a chance of failure inversely proportional to the character’s Intelligence score, so wizards and bards need a high intelligence. Note that if the process fails, the scroll is still lost.

Telling time, seconds vs. rounds vs. turns vs. hours: Seconds, rounds, turns, and hours are the basic units of time that the game uses to determine how long certain effects last. In order to understand how the game handles time, it’s important to know what these units mean in-game. First, a second is a real-world second. When the game says “8 seconds” it means 8 seconds in exactly the same sense the clock on your wall means it. A round consists of 6 seconds, and is the most common form of measurement the game uses. A turn, for some inexplicable reason, is 10 rounds, or 60 seconds. Basically, a turn is equivalent to a real-world minute. Hours are where things get tricky. When the game says “1 hour” it doesn’t mean a real-world hour anymore. The game actually 5 real-world minutes. Larger units of time, such as days, are based off of the in-game definition of hours. As such, one day in game time is 24 game hours.

The full conversion factor is as follows:

Most of this guide assumes that you will be playing Baldur’s Gate, but the same general concepts are applicable to Icewind Dale and Planescape: Torment, with a couple modifications.

Icewind Dale: Character alignments never conflict, and there are no kits (other than specialist wizards). In addition, the barbarian, monk, and sorcerer classes do not exist. Finally, there is no dual-wielding in Icewind Dale, although rangers gain an extra attack per round if they wield a single one-handed weapon and do not use a shield.

Planescape: Torment: There are no kits, and the only available classes are fighter, mage, and thief (although there is an npc cleric) with no multiclassing options (except for certain npcs). In addition, the player character always starts as a fighter, although he may switch classes a short way into the game. Most importantly, Wisdom increases the main character’s rate of experience gain, and Intelligence and Charisma provide additional conversation options (which are extremely important in Planescape: Torment).

Almost A Hero — most general guide
Now, before I get too into this, I should clarify that
024

X-HERO: Idle Avengers — Early strategy guide for beginners
I have been playing this game for a while and here
020.4k.

Grand Chase Raid Guide
Bosses in the first levels are fairly easy to pass.
0398
wpDiscuz
This site uses cookies to store data. By continuing to use the site, you consent to work with these files.