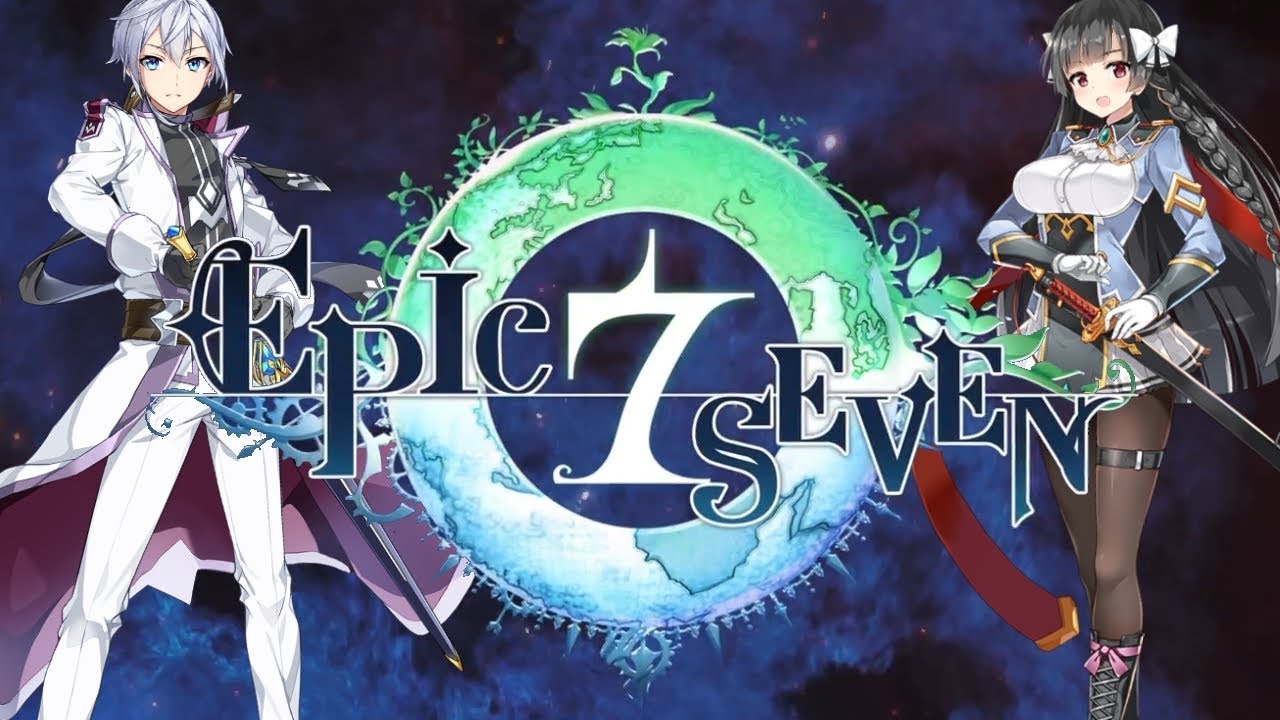 First, look our Guide for Epic Seven for beginners.

Like Epic Seven game? Play it on PC!Download for free and play on PC & Mobile 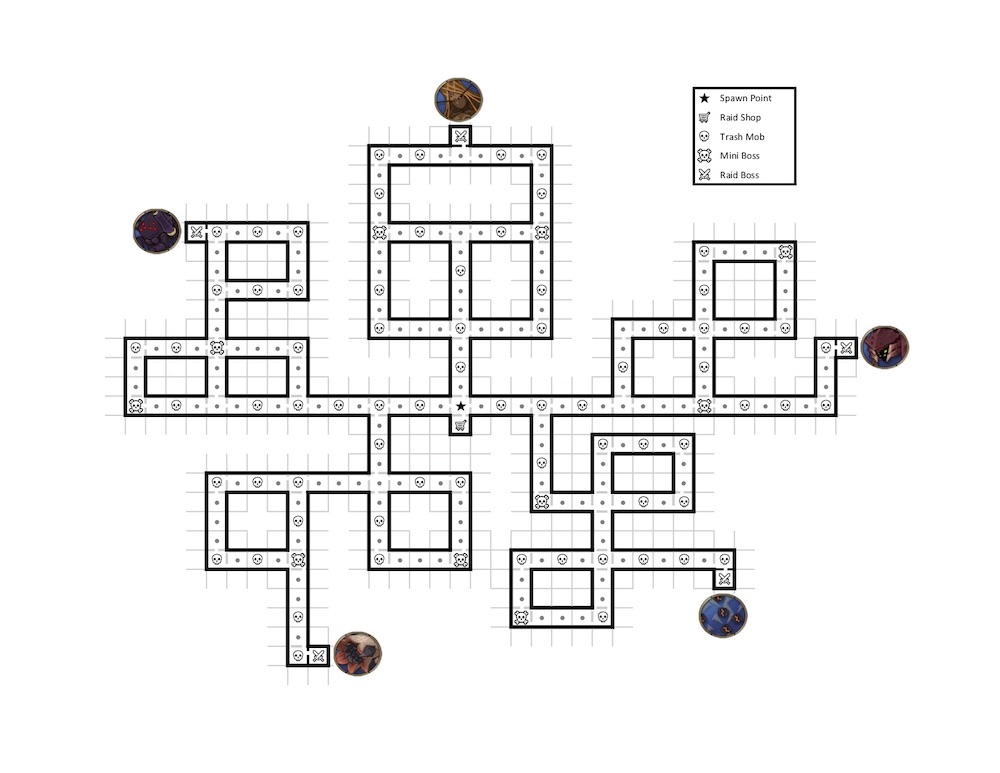 WHO DO I KILL

When you first enter Azmakalis Raid, you will need to do the Raid Tutorial. Only the path to Devourer Arahakan will be open. You will need to kill him before the other paths will unlock.

After that initial kill, and every week after, the paths to the four non-Queen bosses will be unlocked and you can plan which bosses you want to to tackle.

There is no set order to fight the bosses. The choice heavily depends on your team comp and current investment into heroes.

The Raid Bosses have a monster level that gives a general estimate of their relative difficulty and complexity.

If you can’t beat a boss, feel free to attempt any other boss. There is no requirement to kill all the bosses. Defeating at least two bosses is enough to unlock the path to fight Queen.

The tutorial fight. It is a good entry level fight that should not be too difficult to handle. Being dark element means that any DPS should be usable in the fight.

DEFEAT TO UNLOCK OTHER PATHS

Karkanis fight is simple as long as you obey the mechanics.

Should be on the same difficulty level as Arahakan

While Secretary Vera is harder and has a bunch of mechanics, the goal of the fight is very simple.

Deal as much single target damage on Secretary as possible.

Juleeve Council is the most complex fight before Queen.

It also has some tricky requirements such as: No debuffs and must be able to handle the poison debuff.

BRING ALL THE IMMUNE / CLEANSE

The Queen fight is hard. Possibly harder than some later levels in the Abyss. You will need at least 10k+ HP on your entire party to feel comfortable in the fight. 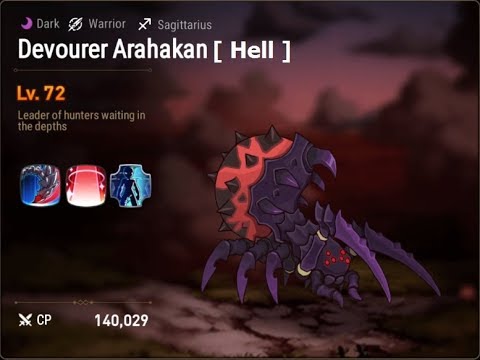 Dashes towards the enemy and attacks,

Sprays a Corrupted Web at all enemies, decreasing Speed for 2 turns and decreasing Combat Readiness by 50%,

This skill can only be used after all allies except for the caster have died.

If Corrupted Web can be used, grants immunity that cannot be dispelled and dramatically decreased damages received.

If Corrupted Web cannot be used, all enemies are inflicted with an unable to be buffed debuff that cannot be dispelled and is not affected by immunity. Cannot receive Combat Readiness increase effects.

Increases Attack and Speed of the Caster at the end of each turn.

If Corrupted Web can be used, caster is granted stackable increased Attack and Critical Hit Chance.

Caster is granted an extra turn and skill cooldowns are reduced by 3 turns if attacked when Health is less than 50%.

Corrupted Web’s skill cooldown is also reduced by an additional 1 turn after it is used if Health is less than 50%. 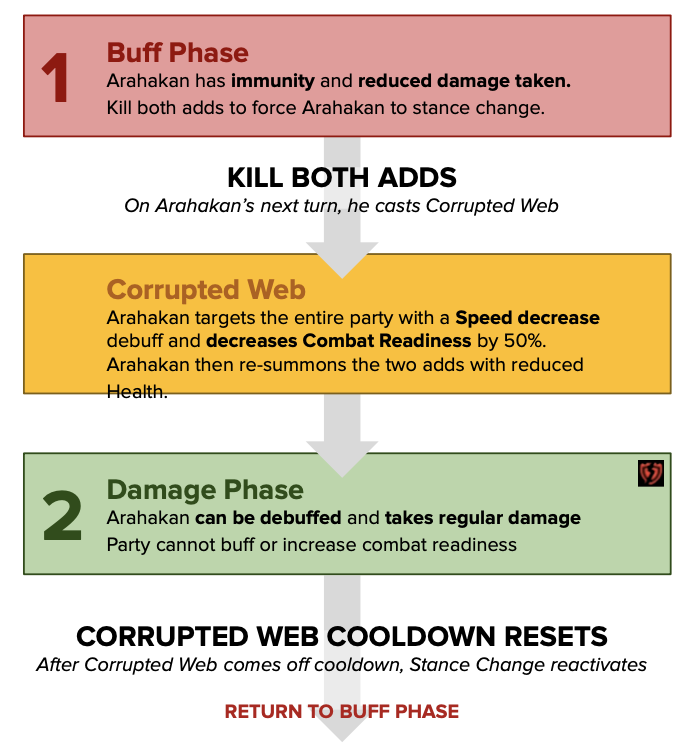 Fight around the Corrupted Web cast

Burn everything during Damage Phase 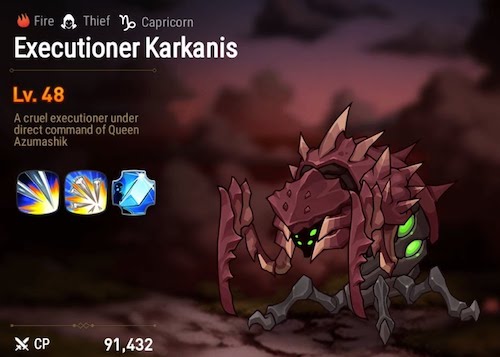 Rushes towards the enemy and attacks, stunning for 2 turns.

If the target’s Health is less than 50%, they will lose 99% of their current Health.

If silenced, this skill will not be activated and cooldown will be increased.

The skill only activates when the caster’s Health is less than 40%.

When attacking, caster is granted stackable increased Attack and Speed.

Increases chance of evading attacks from debuffed enemies, and counterattacks following a successful evasion while dispelling any debuffs inflicted on the caster.

Counterattack will make a Critical Hit.

DO NOT ATTACK WHILE DEBUFFED

Increases Attack and Speed of the caster permanently when Health falls below 40%. Activates Crush after using Slice if cooldown of Crush is reset.

If the caster’s Health is less than 70%, caster is granted an extra turn and casts stealth for 2 turns at the end of the turn.

If the caster is stealthed at the beginning of the turn, recovers Health and grants permanent stackable Attack and Speed increases.

Stealth effect can only activate once every 2 turns. 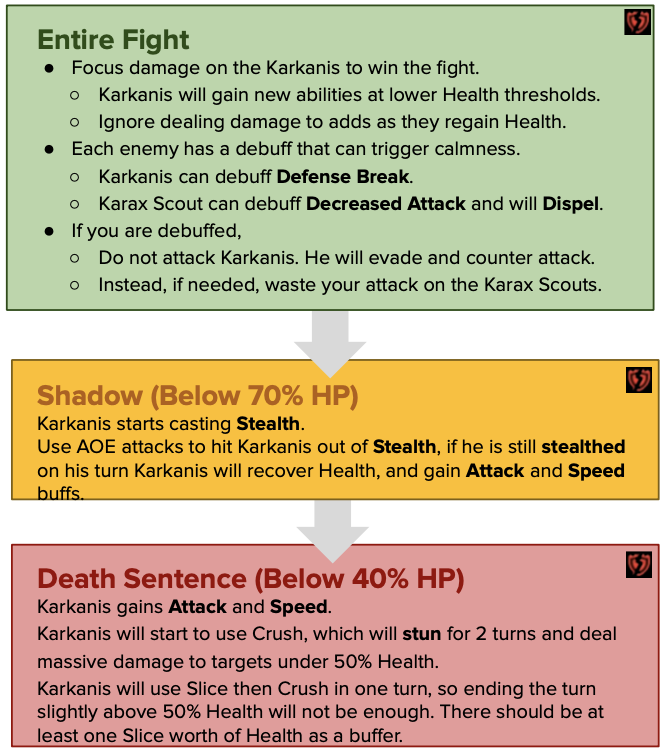 Stay healthy before getting into Death Sentence. 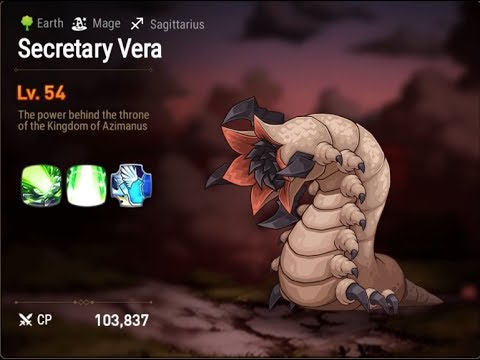 Spits a pile of stones at two random enemies, with a 50% chance to stun for 1 turn.

Summon Azimanus Watcher. If a summoned monster already exists, decrease its skill cooldown by 3 turns and grants an extra turn.

Increases Attack and Speed of the caster each time an Azimanus Watcher hatches,

and increases Combat Readiness of the caster each time an Azimanus Water takes damage.

Transforms into a huge cocoon and summons two Karax Chargers if attacked when Health is less than 50%.

Summons an Azimanus Scout and inflicts all enemies with a random debuff for 3 turns.

The caster dies after using this skill.

Recovers the caster’s Health. If the caster is already at max Health, grants continuous healing for 1 turn instead.

If the caster dies before using this skill, Secretary Vera is summoned with decreased Attack, Defense, Speed and max Health.

Butts the enemy, decreasing the enemy’s Combat Readiness by 100%.

Spits a pile of stones at two random enemies, with a 50% chance to stun for 1 turn.

Stirs up a Boulder Vortex to attack all enemies, with a 75% chance to decrease Attack for 2 turns.

Grants the caster stackable Attack, Defense, and Speed increases every turn after hatching from a cocoon. 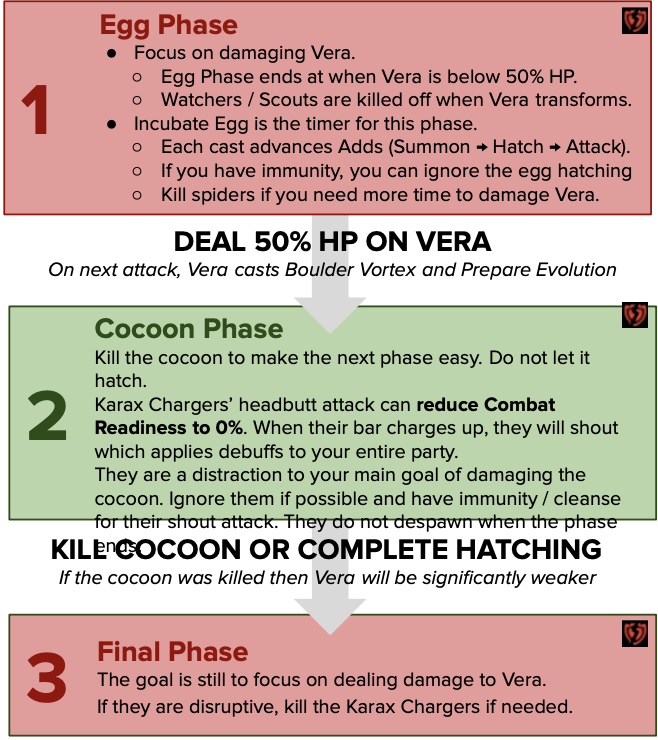 The goal is to deal damage to Vera 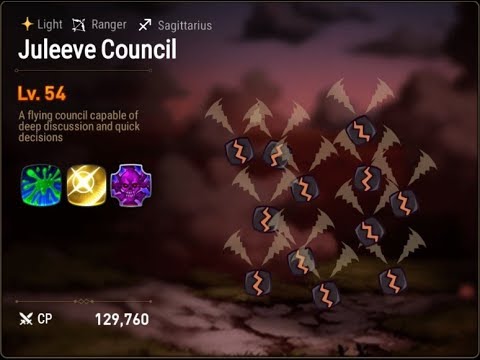 Attacks the enemy, inflicting poison for 2 turns, and granting stackable increased Attack and Speed to the caster. Grants the caster an extra attack with the same skill.

Attack all enemies, dispelling all buffs, and extending the duration of debuffs by 2 turns. Damage dealt increases proportional to the number of debuffs.

Caster splits into three when Health falls below 70% and 40%.

Deals damage to all enemies proportional to the max Health of the target and dispels one buff from all enemies every time the enemy begins a turn if the core monster is not killed.

When reappearing after splitting, reappears with the 70% or 40% Health they had before splitting.

If the caster is attacked while debuffed, grants random buffs for 2 turns before dispelling all debuffs.

Number of buffs granted increases proportional to the number of debuffs, up to a maximum of three buffs.

Poisoned enemies will poison another enemy for 2 turns at the beginning of the turn.

Effect does not occur while splitting. 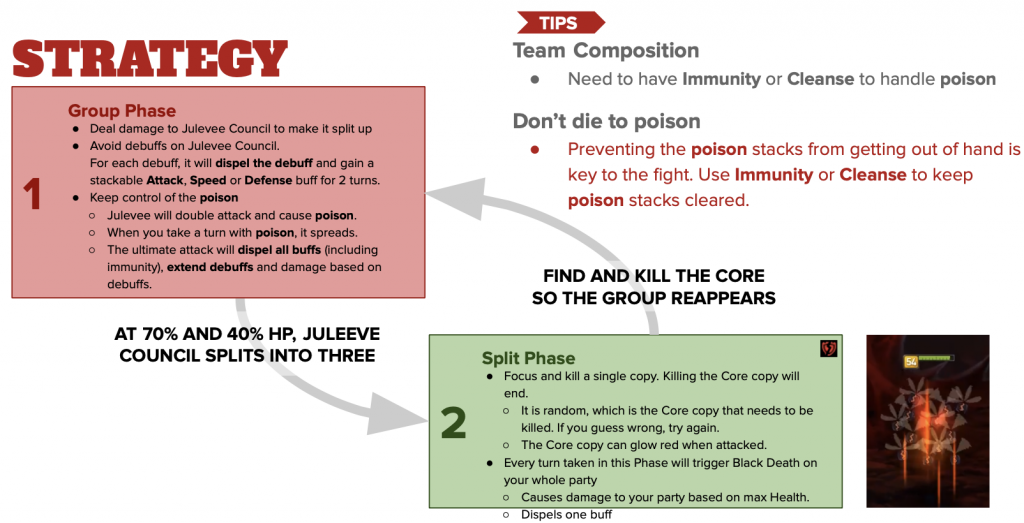 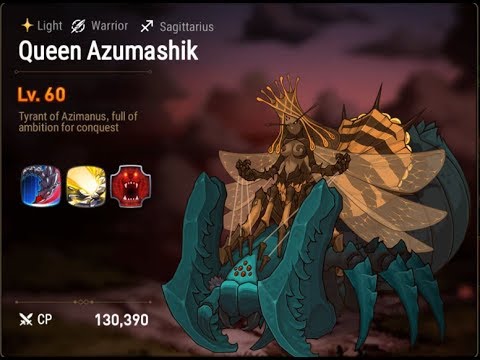 VIDEO HOW TO KILL QUEEN AZUMASHIK GUIDE – TIPS and STRATEGY!

Attacks the enemy, dispelling all buffs before increasing skill cooldown by 1 turn. If the target’s Health is less than 50%, grants an additional AOE attack.

Attack all enemies, inflicting stackable Defense and Speed decreases. Damage dealt increases proportional to the caster’s lost Health. This skill can only be used when the caster’s Health is less than 50%

After taking damage for the first time, attacks all enemies before hatching two eggs to summon two Devourer Arahakans.

If the caster’s Health is less than 50% after taking damage, uses Death Trap before hatching two eggs to summon Raqix Flying Troop.

Queen Azumashik absorbs some of the damage taken by the summoned Devourer Arahakan and Raqix Flying Troop.

Raqix Flying Troop has a 30% chance to counterattack whenever Queen Azumashik takes damage.

Eggs are invincible and immune before hatching.

Decreases the target’s Attack, Hit Chance, and Speed as the Health of enemies decreases.

At the beginning of the caster’s turn, stuns targets with less than 30% Health for 1 turn.

Grants increased Attack and Defense for 2 turns at the beginning of every turn, and grants a stackable Attack increase buff at the end of each turn.

If attacked when inflicted with more than three debuffs, the caster is granted an extra turn and all debuffs are dispelled.

NO MORE THAN 3 DEBUFFS

Guides 0 102 views
Excellent in hidden weapons, this girl, brought up in Bashu Region, with a crossbow

Guides 0 297 views
This is a guide for new players. It will help you with your choices

Guides 0 2,803 views
This tier list is for how good individual units are within a reasonable amount

Guides 1 87,839 views
Some getting started tips for beginners Don’t click “complete” on any daily quest

Walkthroughs 0 92 views
This guide is based on route that Dekap/Nord made, i guess. Since none of