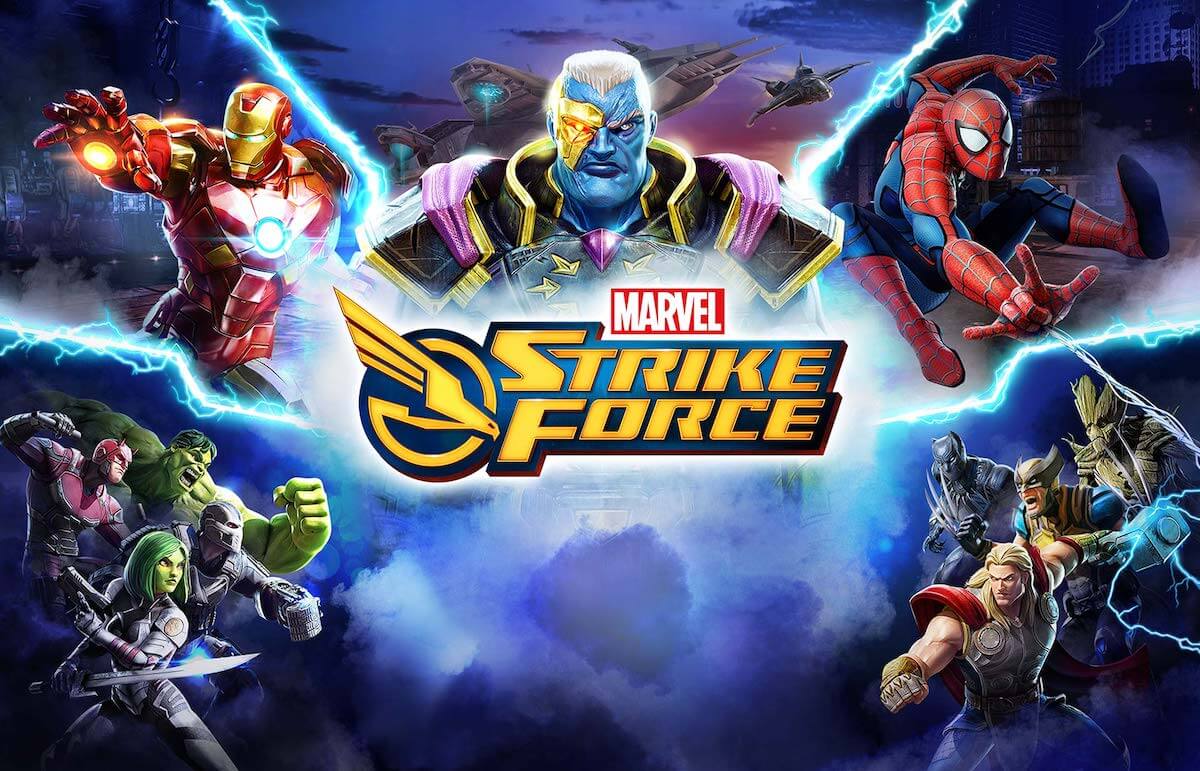 If you are here, then you probably have either already started playing Marvel Strike Force or you are interested in beginning the game. For those who aren’t, or you want more information, Marvel Strike Force is a turn-based action RPG. It is very similar to other gacha games that are out there, with multiple characters to collect and rank up, synergies between characters and PVE/PVP battles.

If you have played anything like Star Wars Galaxy of Heroes, Summoners War or DC Legends, then you know the general gist of things. You will start with some weakish characters provided during the tutorial missions, and have the option to farm other characters after then. 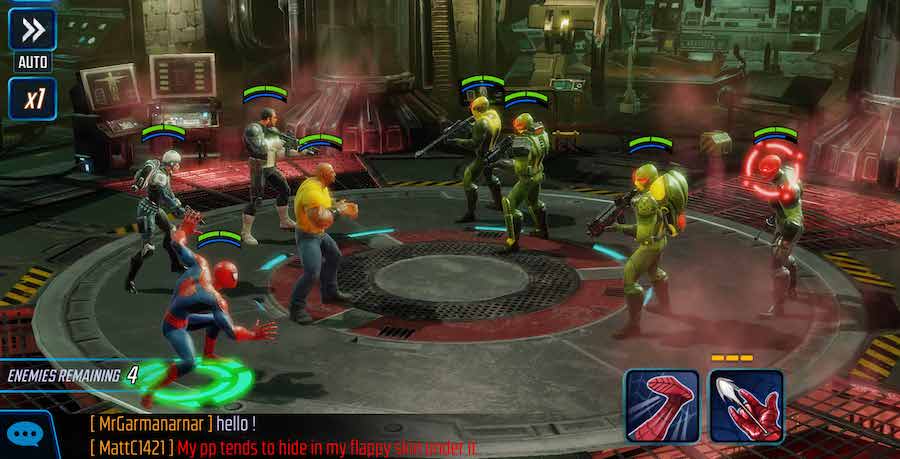 Or more precisely, first things to be doing.

Where to Obtain Characters

Currently, there are a few ways that characters are introduced and able to be obtained.

To find out where a character is farmable from, you can click FIND when you select them in the Roster screen.

Characters to Work On 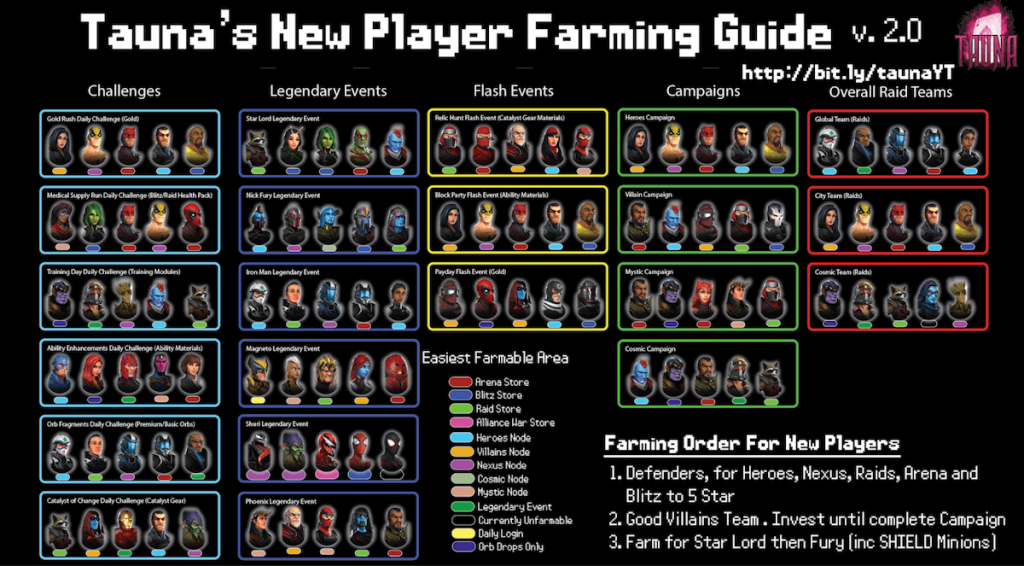 There is a general order that I would suggest working on things included in the above image. Basically you want to go: 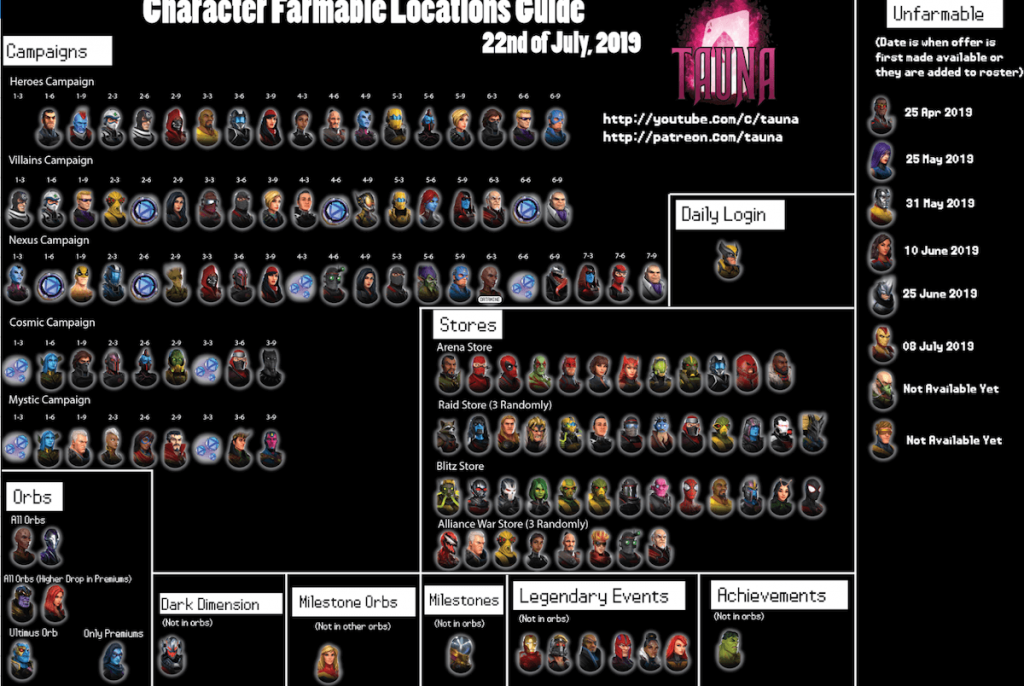 The characters below are the ones I suggest you farm early, as they will get you far. However, there are definitely a lot of other options from the stores (for example, Deadpool from Arena Store) that you want later on.

Once you reach the level that you can join an Alliance, head to the main MSF discord and get into a good one. Raids are one of the most important parts of the game, as they provide a lot of materials to level up your characters abilities, and also Raid Credits for the gear.

Arguably, the best raid team currently is as follows:

This team generates a lot of healing, damage and overall utility, HOWEVER, it is very late game as it requires a character that is unfarmable, a legendary, and an orb-only drop character. For new players, the much better option is getting the Defenders to a high level.

This is an amazing beginner team, with a lot of free damage and a lot of healing. They will kick ass for ages.

Arena is probably the third most important gamemode, after Blitz and raids. This is how you get power cores, and Quake/Drax. There are characters who work well here, who might not be great in other game modes. Arena is split into multiple shards, depending on when you start and possibly timezone. However, there is only one Arena Payout time, unlike other games like Star Wars Galaxy of Heroes.

It’s basically a ladder you need to climb. Number one is best, and that is where you want to aim. People can attack you, you can attack people to climb too. You have 5 free attacks everyday, with a break in between each.

You set a team that your enemy will attack, by using “Set Defense” if that wasn’t obvious. You need to make sure this stays up to date with what you want it to be. Make sure your best team is in here. Best Offense team and best Defense team will usually be different.

This is a very early game Arena Offense and Defense team. Eventually you will want to have different characters on Defense than on Offense, switching characters around to meet your needs.

This team should carry you for quite a while.

In Alliance War, your alliance will be pitted against another alliance of similar ELO. This is based off of two factors. Your current win/lose ratio and your alliance’s overall total collection power.

You will use your whole roster for this game mode, including:

A character who is used on Defense can not be used to attack, and a character who has attacked can only attack once. You will want to coordinate with your alliance members to make sure your attacks and defenses are being used well.

Dark Dimension is a late game mode. Very late game. You won’t even want to worry about this until you are clearing Ultimus VI on a regular basis, and doing very well. It is split into two levels.

Red Stars are an alternate way to power up your characters later in the game, and currently unlock at level 52.

Guides 0 101 views
Excellent in hidden weapons, this girl, brought up in Bashu Region, with a crossbow

Guides 0 295 views
This is a guide for new players. It will help you with your choices

Guides 0 2,796 views
This tier list is for how good individual units are within a reasonable amount

Guides 1 87,563 views
Some getting started tips for beginners Don’t click “complete” on any daily quest

Guides 0 389 views
KingsRoad is a free-to-play, browser-based, action RPG by Rumble Entertainment. It can be played