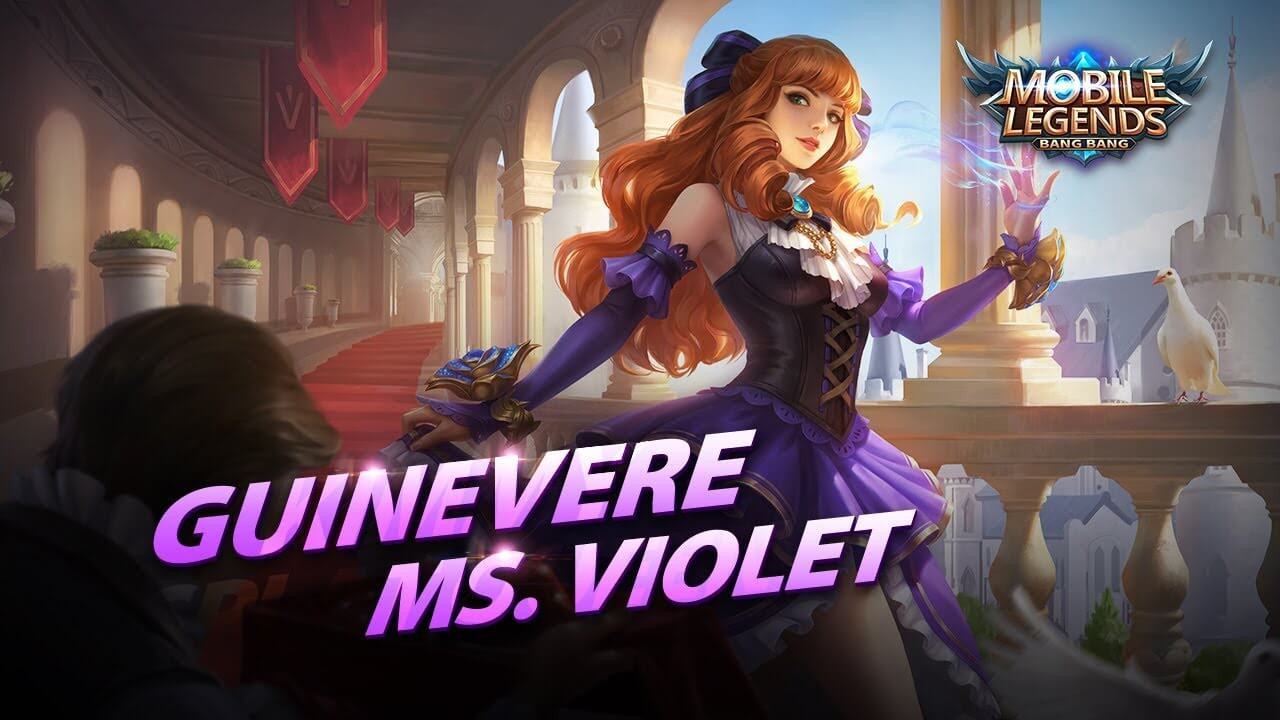 After the red bar gets full above her head, release an extra damaging basic attack that chases an enemy from quite a big distance. You also regen 10% HP! This gives her a lot, early game sustain and added mobility so that you don’t have to waste your mobility skills. She also does extra to knocked up enemies, and with her skill set thats going to be happening a lot.

Her poking tool. Has a low CD of 4, and a hit reduces all her skills CD by 1. You want to be spamming this as much as possible. It’s the main reason why she’s able to be so mobile and keep on being able to jump into the fight. The slow is also really nice and easily spammable, so you can chase people down fairly easily instead of resorting to your S2. While most people say your useless without your S2, that isn’t the case. Spam it and punch them with true damage from your items. Your passive chase helps you do this as well

Now this is the big thing that makes the passive work. First time you you use it, you do a thump that knocks up enemies. As long as the enemy is in the inner circle, they’ll be hit. Some tips:

The 2nd part of this skill is an extra dash that leaves a clone. It’ll take damage as normal and as such, enemies can use their skills on it. If you do it quick enough, enemies like Kaja will use their Ult on the clone before it hits you. You can also use it to block Harley’s ring o fire. Pretty nifty right?

Now this skill will be a large part in most of what you do, and as such you gotta time it where it’s effective. Use it on situations where you need to do damage, but also to be unbelievably mobile. Determine yourself what’s best. Compare it to Gusion’s Ult in a way, you either wanna use both parts to chase enemies or use one to go in and the other to get out. Speaking of Ults… 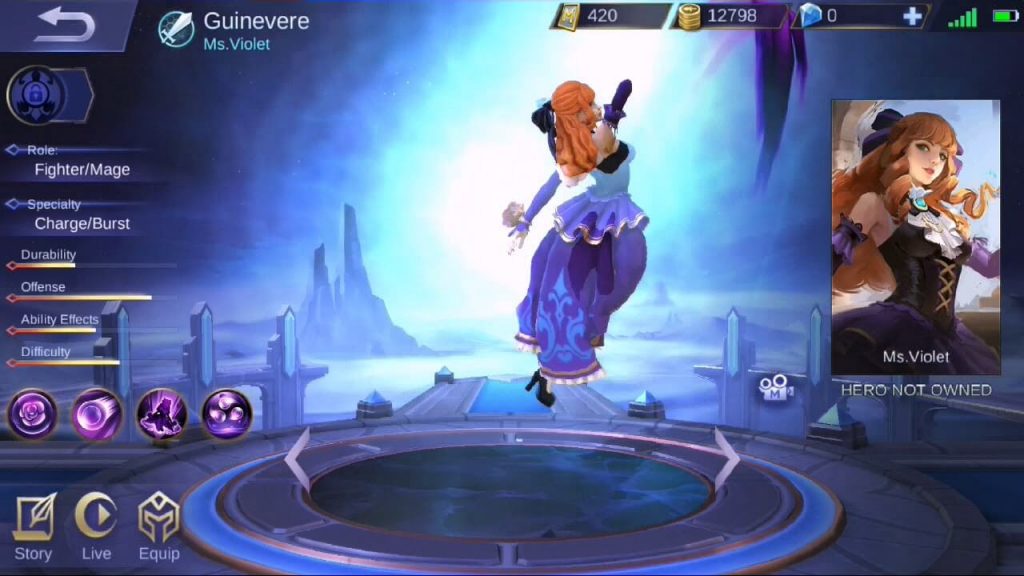 Large AoE and if the enemies are already knocked up, they get knocked up an additional 6 times. This is gonna be your large source of burst damage and also for keeping enemies in place for your team to wipe them out. The scaling on it is unbelievable, so it will hurt all stages of the game. But wait there’s more!

YOUR IMMUNE TO CC

Yeah that’s right, through the entire time you spinning in the air, CC effects won’t work. Whoever is trapped in their WILL be trapped and no one can do anything about it unless they have Purify. Due to this property, you could also use the Ult as a way to bait CC’s so that you can use your skill 2 to run away. Yeah, the CD is long but as I said earlier, your skill 1 is gonna make it seem like you have it up 24/7.

The reasoning for this will be explained later in the build section, but my general combo is as follows

When knocking up an enemy: Skill 2-Basic-Ult-Basic-Skill 1-Basic-Skill 2-Basic and then spam skill 1 until everything refreshes again and repeat. Skill 1 and spamming basic to chase a single enemy also isn’t bad

BEFORE YOU START LANING

Literally any lane works for Guinevere. She is honestly a good mid that can hold her own, and she very much rivals the likes of Harley and Gusion. They do farm a little bit faster, so if they are on your team, giving them it is probably for the best. But if you’re the only good mid on your team, by all means go for it. She’s also good bot and top, proving any support for MM’s that need protection through CC’s or securing enemy kills. And because she has enough damage potential herself, she can lane with a support or tank that will assist Guin in getting some kills.

Your strongest stages are gonna be your early and mid game, but her late game is also nothing to ignore. At the start of the game, keep poking with your skill 1 and try to get level 2 so you can get your roaming skill. After that, continue poking at enemies and do what you can to push them back. You have much better sustain than most heroes so they’ll be the ones to back off first. Guin plays similarly to Chou, so you’re going to want to roam as soon as you can. She jungles pretty fast as well so this makes it much easier. Try to help your team by knocking up enemies and securing kills and assists. When played right, Guin can snowball pretty hard and completely control the early and mid game. Due to your super mobility, you can also push towers and get out quickly. Her basic attacks do pack a bit of a punch.

Guin is very good at being the initiator. With her knock ups and immunity to CC during Ult, she can hit up enemies and allow your team to jump in. However, she’s also relatively squishy so if there’s a couple of enemies not stuck in your Ult, you might get bursted. So there will be times you want the tank to go in first before you start anything. You can also combo your knock ups off of your tanks knock ups as well, so waiting till they go in can be good. Overall, you need to determine the best time to jump into the fray. 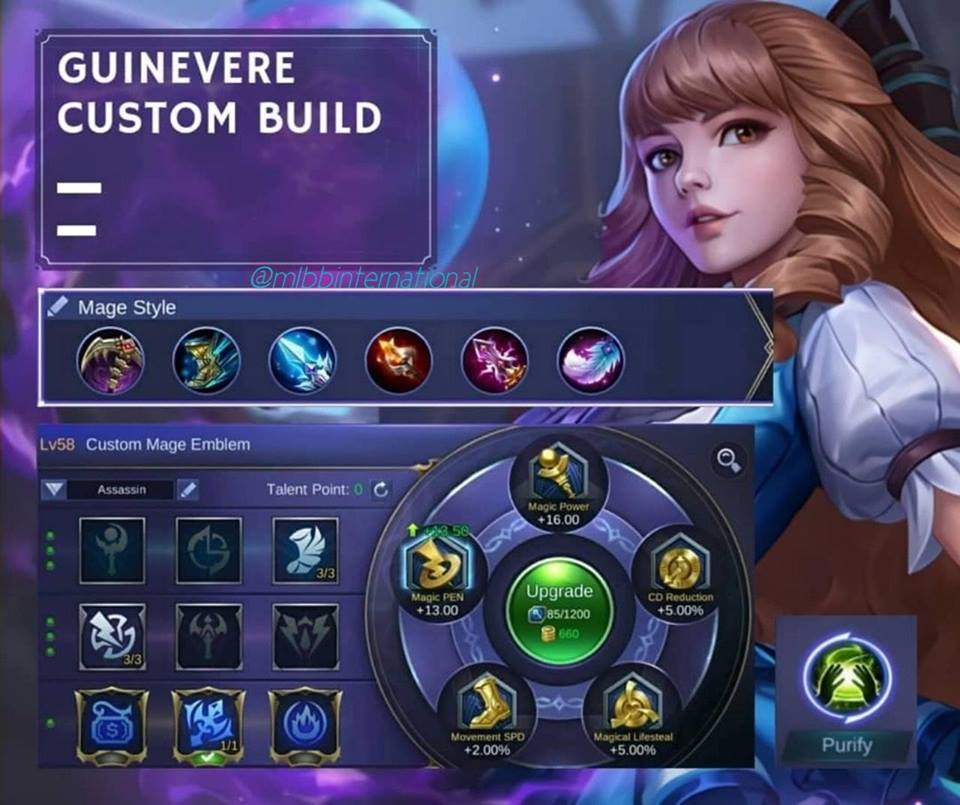 SPELL: Retri, Purify, Execute and Aegis are all good choices. Retri lets you mid very well and gives you the added ability of being able to jungle fast. Purify gives you some added protection during CD of your skill 2, Execute let’s you makes sure an enemy gets taken out. Depending on how frequently you see enemies leave with barely any health, you might want this. And Aegis is a nice little added shield for you in case you want the added protection during Ult

The other two emblems don’t really offer a whole lot. While the burn can be nice, getting less money for her items is amazing cause again, her scaling off of magic power is crazy good. This allows her to get those items as soon as possible. And the last talent is kinda useless because she doesn’t need the extra mana

I like Guin to be full Mage assassin. With her passive and life steal, she doesn’t need to be completely tanky.

So now you know all the general information on how to play and build Guin, so why should you use her?

How to play as Guinevere — video