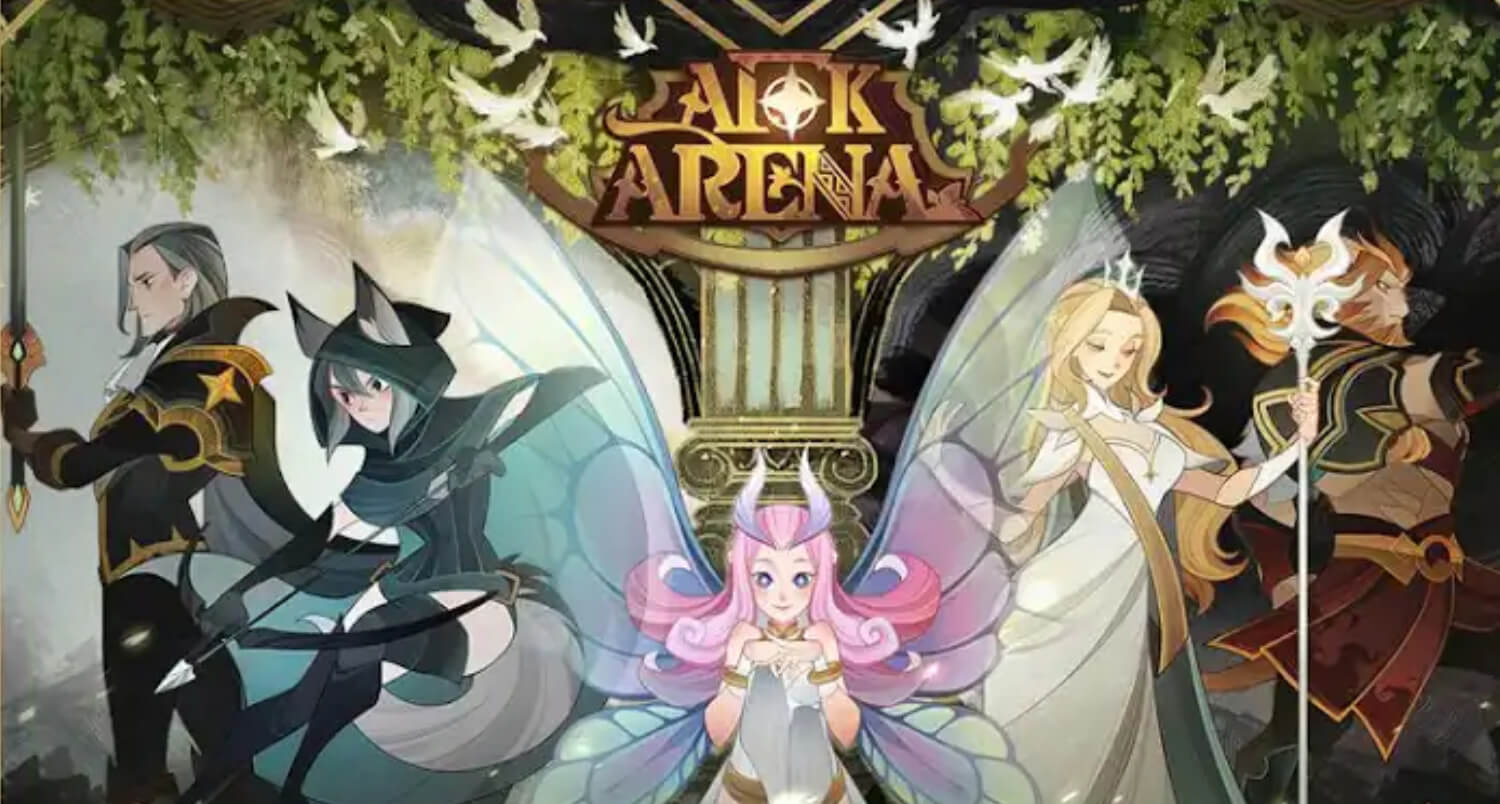 So I noticed a severe lack of “wtf do I do?” guides here. So I figured I’d throw up a list of tips on a per-chapter basis so people know wtf to do, as well as avoid some mistakes that can set them back.

Note that this guide is very long. The attempt here is to be as detailed as possible. This is, essentially, a hand-hold until you get the hang of things.

If you haven’t played an idle game before, the basic gist of this game is that you don’t have energy restrictions – you can attempt a stage as many times as you can stomach – the stages just get harder and harder and harder to defeat the further you get. The only way to beat them is to make your heroes stronger. You do that through three (well, technically four) different methods:

I don’t want to beat this section to death, because the resources in the game are pretty intuitive, I just want to provide some info as well as a few warnings:

To keep this guide succinct and within the word limit, I’m going to do an outline form of guide, rather than the original ‘talk you through it’ style that I had here.

If your elite hero is one of the ‘very good’ ones mentioned above, then level them as high as you can (should be about level 26 iirc). If you got unlucky with something like Warek or Skreg, then just level them to 11, and level up Hogan as high as he can go instead. Hogan’s still a pretty good hero and you want him delaying the enemy as long as possible so your back line can deal damage, CC, or heal. There’s not much else you can do after this, so just continue the campaign with Chapter 2.

Progress through the next 4 levels, then when you beat the boss of 2-4, you’ll open the Arcane Labyrinth! This will be a hefty detour in the guide, because the Lab is a big piece of content.

Note that you should ONLY be investing resources into 5 characters at this point. Having Ira/Mirael at level 11 is fine for now, even if you aren’t using them, but don’t level up more than that, you’ll understand why when you finish chapter 4.

Pick a good team with your summons that has decent synergy (1-2 damage dealers, 1-2 supports/healers, 2 tanks – bonus points if at least 3 of them are the same faction), and run with it all the way to the end of chapter 4.

The strategy for your first time or two is simple – obtain a healer, obtain two front line tanks (Hogan is one, you will probably have to scavenge for another and/or a healer), hit the red flags and heal as necessary on the fountains.

You can nab a damage dealer or two if the carts are offering S+ tier heroes you don’t have, like Shemira.

After your first couple of labs, the strategy changes a little bit. Visit less carts – ONLY fill out your roster with an S+ healer or tank. Visit as many red flag battles on the first ‘floor’ (since these are easier) as possible. Keep doing red flags where possible/your health allows. Also make sure you’re taking good, synergistic relics. Consult the above tier list.

Let’s pause for a moment and talk about rerolls. If you want the best possible start you can get, you can easily ‘reroll’ your account to get different RNG on your first 11 summons (the guaranteed epic, and the 10-summon after defeating 2-8 and Lab). Click on your profile picture, click “settings” down on the bottom right of the window that pops up, and “Select Server” – choose the next server down the list, and do this whole process all over again. Takes 30-45 minutes per account. I rolled four, pulled Shemira and three Saveas on my now main account, and stopped.

Guilds, Friends, and the Library

After joining a guild, you can participate in “guild hunts”, which is just a special battle against one opponent. Wrizz is available daily, while Soren can only be opened with “participation points” that each member earns for the guild.

The basic strategy is just deal as much damage as possible, and he drops chests for different thresholds of damage. Since AoE spells usually do less damage to single targets, the general rule of thumb is bring single-target damage dealers like Saveas. I will say that my Shemira does work against him at my level, though, because she can basically full-heal herself after her ult.

Eventually his damage will be too much to handle and your heroes will start dying off, that’s fine. You’re just trying to dish out as much as possible.

Soren is very similar, I’ve only fought him once, so I can’t really say much more about him.

Now’s a good time to go over Ascension in the Temple of Ascension. This will be a bit longer.

The general gist is that you are feeding duplicate copies of heroes to themselves to increase their ‘quality’, which also increases their stats. There are two general stages:

Each stage has different specific requirements (sometimes it’s 1 copy, sometimes 2, sometimes it’s the same ascension-level, sometimes it isn’t), but that’s outside the scope of this guide. Here is a good visual that demonstrates the full process pretty cleanly.

Know only that Rare to Rare+ and Epic to Epic+ are always worth doing immediately. There is literally NEVER a drawback to these steps, so don’t feel like you have to ‘hold on’ to Rare or Epic copies of heroes, you don’t. The “+” copies are a bit more nuanced, and you’ll pick that up as you start deciding which heroes to ascend first. Again that’s outside the scope of this guide.

Note that the later processes for ascension require you to juggle quite a few heroes for fodder, keep track of which heroes in a given faction you’ve ascended for future fodder. If you’re wanting to ascend your Shemira to Legendary, and you ascend a Vedan to Elite and then ascend a Niru to elite, both as fodder, this is counter-productive, because two Elite Vedans or two elite Niru’s can be further ascended to Elite+, but an Elite Niru and an Elite Vedan cannot interact with each other. Make sense?

From here on out, it’s more of the same. It’s probably worth going over the nuances of battles at this point, though:

Beyond just leveling your heroes and throwing equipment on them, battle formation and composition play a role in battles. If you’re wondering why you’re suddenly getting decimated by a level, there are several reasons why:

Okay, our second-to-last section of the guide is the Resonating Crystal. This opens when you finish chapter 4. It’s a little complicated at first sight, but it’s actually pretty simple.

Up to this point you should have a ‘main team’ that you’ve been using as I suggested in chapter 2. If you open up the Resonating Crystal you’ll see all 5 of them standing on the screen. The resonating crystal automatically takes your highest-leveled 5 heroes, and places the one with the lowest level in the middle.

Upon obtaining the building, you’ll have two slots available to put other heroes in. A hero in one of these slots will ‘artificially’ have their level increased up to the fifth-highest hero in your inventory. Once you remove the hero their level will be returned to level 1, and that slot will go on a 1-day delay before you can put anyone in there.

THIS is why you you only level 5 at a time, though. Because you can focus ALL of your resources into 5 heroes, and then sort of ‘cheat level’ heroes in the Resonating Crystal.

So what’s the strategy, here? Who should you manually level and who should you stick in the Resonating Crystal? Primary damage dealers should ALWAYS be manually leveled. For instance if you are using Saveas, you’ll probably be leveling him before your other heroes to the next ability-tier (41, 61, 81, etc.). You can’t do this if he’s in the resonating crystal, because he’ll only match the LOWEST of your five.

So pick a leveling order for all the heroes that you want to use. Heroes #1, 2, and 3 should be manually leveled, 4-? can be put in the resonating crystal. I would manually level your highest-ascended heroes, simply because their level cap is higher and they’ll likely also reach higher ascensions sooner as well. I’ve found that the first 3 heroes to the next ability tier are important, but the last two members of your team don’t really matter.

That also brings up leveling strategy. I’ve seen a lot of players leveling all of their heroes “evenly,” and this is a mistake. You gain some stats over those 20 levels, sure, but the MOST important level is the ability level that costs hero’s essence. You get to that level faster by focus-leveling one at a time.

So once you’ve decided on leveling order, you’ve probably realized that your #4 and #6 or 7 (or whatever) are currently already leveled up to 41 or 61 or whatever. That’s fine!

That’s what the rickety cart’s OTHER tab is for. For 20 crystals you can ‘reset’ any hero back to level one, and it fully refunds all the resources you’ve dumped into them, including unequipping their gear. You can then level up another hero to where they were, easy as pie!

If you have a level 11 elite-base hero that you don’t want to manually level, then wait until you get another copy of them, and ascend a LEVEL 1 version of him to get those resources back. 🙂 The resources to level 11 are small potatoes anyway, but this is how you do things “fully efficiently”.

We’re here, at the end of the guide! Hurrah! Getting to Peaks of time takes a full chapter and a few more levels beyond at chapter 6, level 4. Just power through chapter 5, adjusting formations and maybe messing with the resonating crystals and/or resetting heroes if you made a mistake or whatever (100 crystals-worth of mistakes is really no big deal over the long run, that’s one daily reward at 80 points. ;))

The Peaks of Time is pretty straightforward and kind of fun. It’s similar to the Labyrinth, but it’s more of an exploration than a straight-shot to the end. You have a certain number of chests you can obtain (and one is VERY important), and you have to find them by defeating enemies in key locations. You have less resources than lab (there are only like 5 or 6 total battles for relics, one or two healing stations, and IIRC only one wagon to hire a hero to help, might have been two), so you have to be a bit more tactical. You can get all of the chests in one go, though, I did! 🙂

For now this is the only scenario available here, but a new one opens after the 4th stage of every chapter, each with really good rewards like epic-tier heroes (you can get another copy of Shemira later on, for instance), great equipment, and other things.

Do you have an intermediate and advanced guide?