Base Stats (at Level 1 with no support cards):

Max Stats (at EX Level 60 with support cards but no augmentations):

Second only to her Suicide Squad counterpart in terms of highest Harley Quinn damage stat, AK Harley goes far and beyond the role of a classic support card. Her health leaves a little to be desired, but due to the nature of her passive, she shouldn’t be directly on the battlefield anyway. 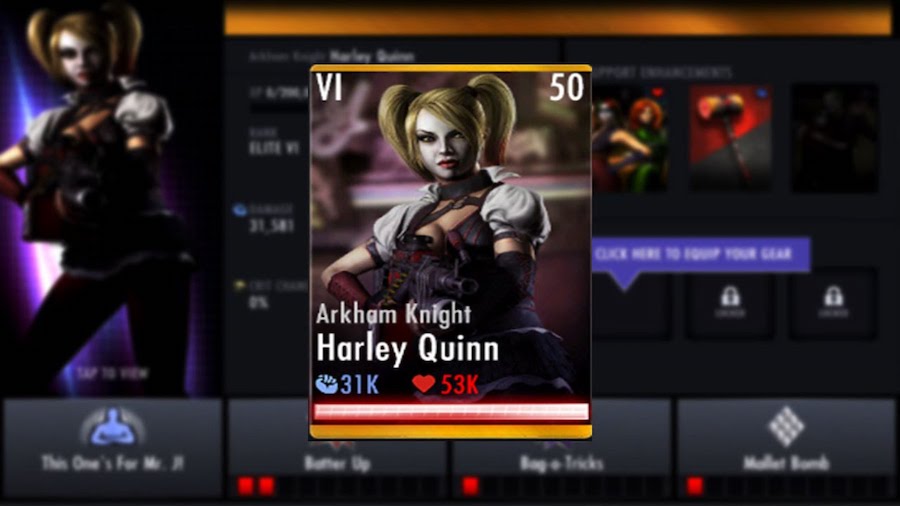 This One’s For Mr. J!: When the enemy Tags-In, Harley may perform a surprise attack (if she is Tagged-Out). If The Joker’s knocked out on Harley’s team, she gains full POWER.

AK Harley trades in her typical team-wide buff in favor of a more offensive passive support, allowing her to provide fire support from the sidelines on unsuspecting opponents. Her passive has a roughly 35% chance of triggering, dealing circa 60% of her total damage stat upon activation (when unblocked) and staggering the opponent, leaving them open to counterattacks. It also generates power for the tagged out AKHQ.

And while it isn’t the most reliable, with a decent amount of luck, her primary passive can even protect your teammates from dangerous stun on tag-in characters such as Lucy Bane, AK Batgirl or E2 Flash. Not to mention countering the passive effects of cards like Hawkgirl Prime and Black Adam’s orb shields.

Furthermore, her secondary passive is a great emergency safeguard and ensures that she gets full revenge on anyone who KO’s her beloved Puddin’, should they be on the same team. 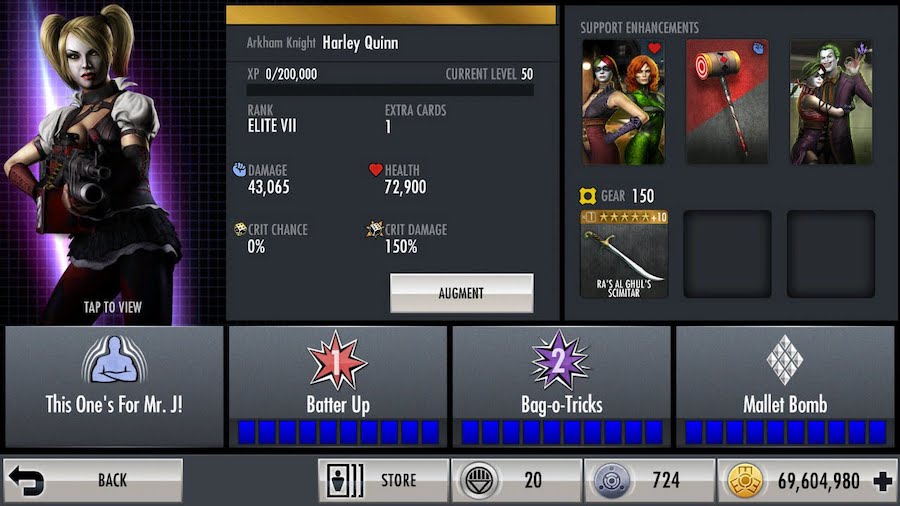 Both her attacks do have more than the usual amount of hits for basic attacks, and her heavy attacks make for a better juggle, but her combo ender does pair up nicely with gears focussing on combo enders.

The key strategy in using any Harley card is to relentlessly spam their SP2, though in the case of AKHQ, her SP1 does pack an impressive punch – especially considering how it is a multi-hit SP capable of striking several opponents in a row.

The classic Harley SP2 and the SP which should generally remain the focus. Bag-O-Tricks grants the player the choice between one of three rotating effect: a single-hit unblockable bomb that can devastate the opponent (and take care of cards such as Raven Prime), a team-wide heal by 30% of their health, and a team-wide damage boost of 50%.

It is worth noting that while the first buff that appears is random, the order of these buffs is ALWAYS the same – meaning if you remember the order in which they appear, you’ll quickly learn when to time its activation.

This Special also has excellent synergy with her signature gear, which will allow the team healing properties to stack. Also worth noting: while it is a fairly dirty trick, you can gain unlimited team healing by equipping Harley with the Tantu Totem (since choosing team heal or team damage boost deals no damage to the opponent, your power will get refunded and you may activate another SP2).

A neat attack, but we will almost never use this move.

AK Harley can be equipped in many different ways, though some obvious gears jump to mind:

As mentioned above, this gear has incredibly synergy with her SP2 and increases the usefulness of her SP1.

Gear that will aid her in activating her SP2 as quick as possible. In the case of the Totem (as mentioned above), you can exploit it in emergencies. Though I’d personally call it a somewhat dirty trick.

Equipment that capitalizes on combo enders can also be a decent choice for her, as she has a longer-than-normal combo ender.

One of Arkham Knight Harley Quinn’s strongest points is her incredibly versatile synergy with a wide variety of characters available in the game. Whether with her Arkham teammates, Joker companions, or cards who specialize in forcing the opponent to tag out, AKHQ can shine.

Due to her passive, she should be left out of the fray for as much as possible, but don’t be afraid to throw her into the chaos of battle, as she is more than capable of handling herself. Use her SP2 for team healing and dealing powerful blows to opponents low on health, and catch opponents off-guard with a few bruising swings from her trusty bat before tagging her back out.

Down below are some especially dangerous teams/companions:

If you want to take full advantage of her primary passive, I highly recommend you to always team AKHQ with Antimatter Sinestro, whose passive forces opponents to tag out when he launches his SP1. This duo makes a dangerous pair – spam AMS’ SP1 and watch AK Harley provide fire support from the sidelines, dealing massive damage.

As for Gaslight Batman, what makes these two so dangerous together is the fact that GLBM’s primary passive is unblockable, meaning that if both their passives activate at the same time, the opponent has no chance of defending against AKHQ’s fire support.

Furthermore, the many ways GLBM can inflict DOT provides increased opportunities for the enemy AI to tag out and potentially activate AKHQ’s passive.

Therefore, GLBM / AMS / AKHQ is in my opinion the best option for a team focussing on her primary passive abilities.

As an Arkham Knight card, AK Harley boasts fantastic synergy with the majority of Arkham cards out there. Some especially noteworthy combinations are:

This is easily one of my Top 3 favorite teams to play and boasts incredible synergy with one another. AOJ’s DOT passive increases the tendency for the AI to tag out, granting AKHQ more opportunities for her primary passive to activate, Furthermore, she counts towards AOJ’s passive boost and gains full power should AOJ get KO’d.

On top of that, we have AOB in the role of tank and granting all Arkham members a full bar of power at 50% health, allowing AKHQ to gain two different power boosts.

The classic Arkham Knight Femme Fatale team, this is a nightmare trio to face. Similar to the above, AKCW’s unrinseable DOT poses a dangerous threat when paired with these two and DOT causes the enemy AI to tag out more frequently. Coupled with AKBG’s passive, this trio boasts some impressive synergy that makes them hard to take down.

Any Joker card will activate her secondary passive. What’s more, two Joker companions on the same team will activate it twice. Given the amount of Joker cards in the game, there are some impressive combinations that can be used.

The combination of Joker Prime and Insurgency Joker can weaken the opponent team, after whose deaths AKHQ can wipe the floor with her newly gained power.

There is only one Joker who is not impressive when teamed with AKHQ, and that is Killing Joke Joker. His passive is essentially useless when paired with AKHQ.

Another Joker character who boasts great synergy with AKHQ is Lord Joker, who grants all Harley cards (among others) 20% Area of Effect damage. In fact, his passive allows for the so-called “Gunners” to form an AoE-based team, in which each special deals splash damage to the enemy team.

Be however wary of the fact that in certain situations, her passive can indeed cause more harm than good. For example:

Arkham Knight Harley Quinn is an incredibly versatile teammate who boasts some fantastic synergy with a vast array of teammates available in-game. Her improved stats no longer constrain her to the role of pure support (as with her previous iterations), and she is more than capable of handling herself on the battlefield.

Arguably the best variation of Harley Quinn so far.