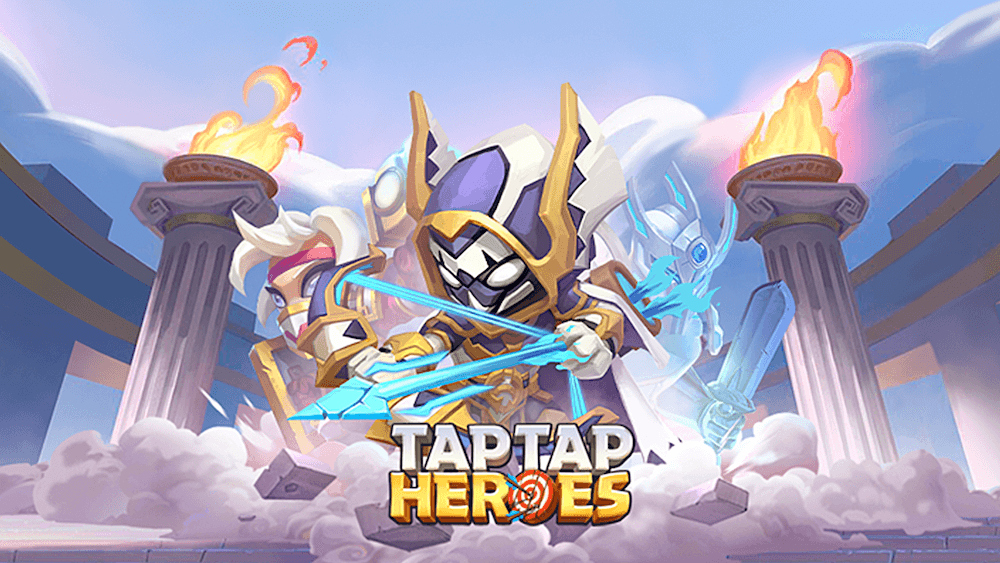 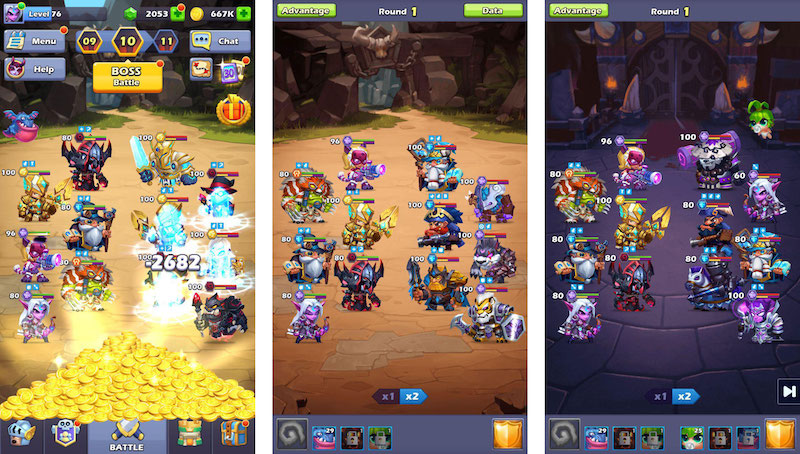 Best Hero in the game!

Ok so, 285 attack score is enormous. It is much, much higher than any previous hero in the game.
Phoenix only has slightly above-average damage and heals. His stuns when he revives are very good, but they are not crazy either. He doesn’t have shudde and drow’s huge heals. The energy he gives with his skill is cool but that’s it.
But he has one single, HUGE, strength: his skill applies burn to all enemies, who then take +30% damage from all phoenix’s team thanks to his passive Flame Ambition, and most of them get their defense reduced by 10. Overall, all the enemy team takes around 40% additional damage from all sources and this, is huge. This is what makes him incredibly strong. And he’s immune to burns so he’s the only one who is not affected by this. 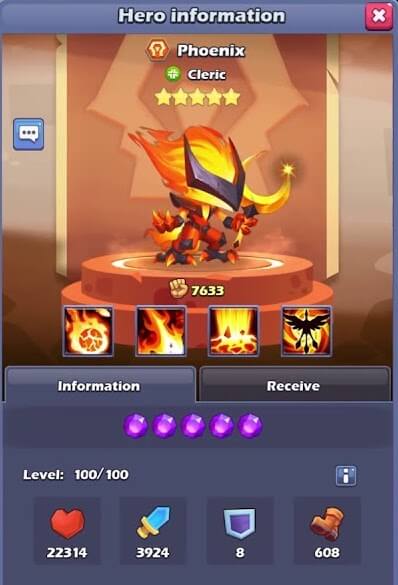 Also, his ability to lower by 25% the attack of the enemy with the most attack with his auto hit is super strong.
By far the best hero in the game.

Second biggest damage dealer in the game after chessia. Huge heals. Demential attack debuff. Big survivability in the frontline. What can I say, she is game-changing with a TOTG. 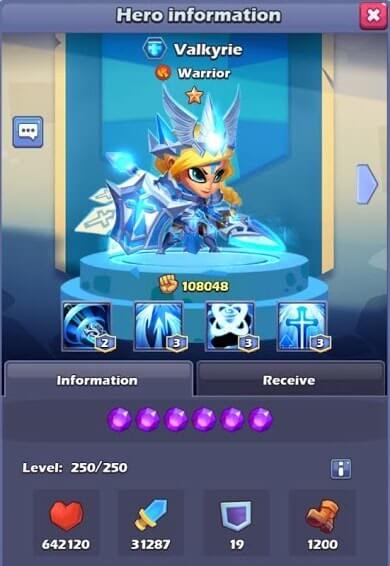 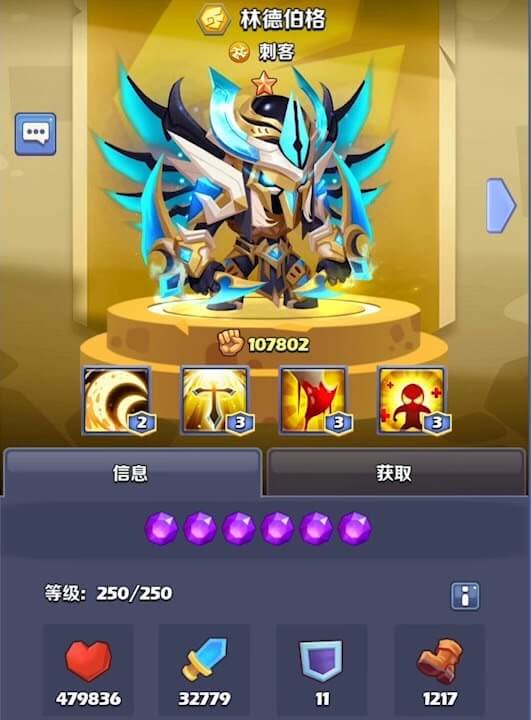 Huge damage, great survivability with his revive and above all incredible early stuns. Needs the speed rune for the ccs to hit early. He doesn’t even need TOTG, he’s fast enough with Wind Walker or Light Pace. 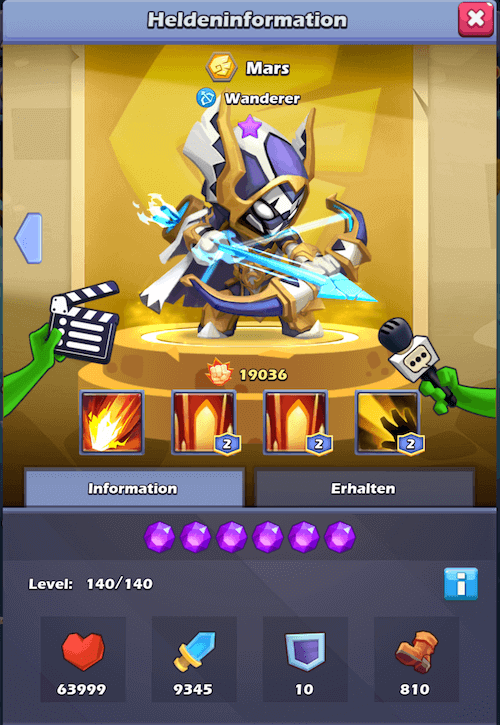 Shudde has insane healing and silences, along with great damage and super high speed. She is so fast that she can afford the attack rune. She doesn’t even want TOTG because her speed lets her silence enemies with TOTG before they can use their skills, which is even better. Her speed also lets her empty her energy soon and get back more through Creation to use her skill again on the next turn. Outstanding hero, both in pvp and pve. 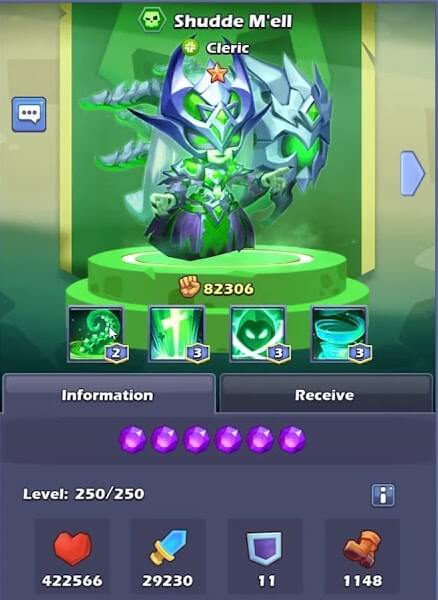 Pretty big damage and incredible heals. Nice stuns against clerics, and a non-negligeable silence when she reaches 50% hp. She’s comparable to Shudde, with less silences but more damage and healing. If you use Star Pray, you can use an attack rune instead of an accuracy rune. An incredible hero for sure. 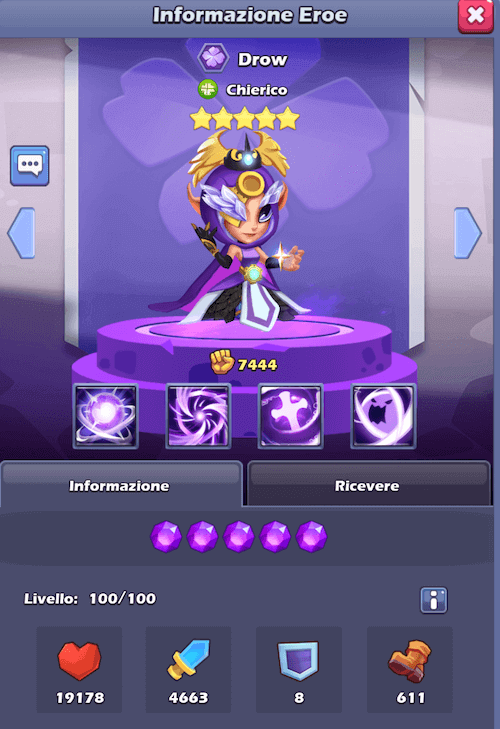 Medusa has good damage and a pretty low survavibility. Very nice 2-turns petrifies with her attacks and skills. Very versatile, provides both good damage and control. Overall, she would be a great addition to any unity team. The new best horde hero after her rework? 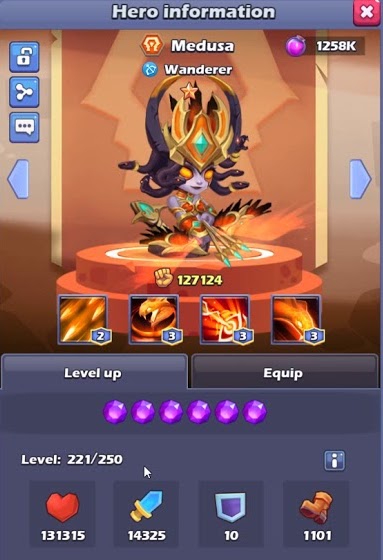 Chessia deals insanedamage increasing during the fight. If she hits her skill for the second time, you can basically consider the fight is won. The downside is, her survivability is low and her damage is all she has to offer. She reallyneeds TOTG though, because it lets her use her skill on turn 1, charge it during turn 2 when other heroes use their skills, and then use her skill again on turn 2 (or 3 depending on the other heroes’ speed) because she is slow. Pair her with support heroes with early ccs to protect her and compensate for her low utility, and expect huge damage from her. 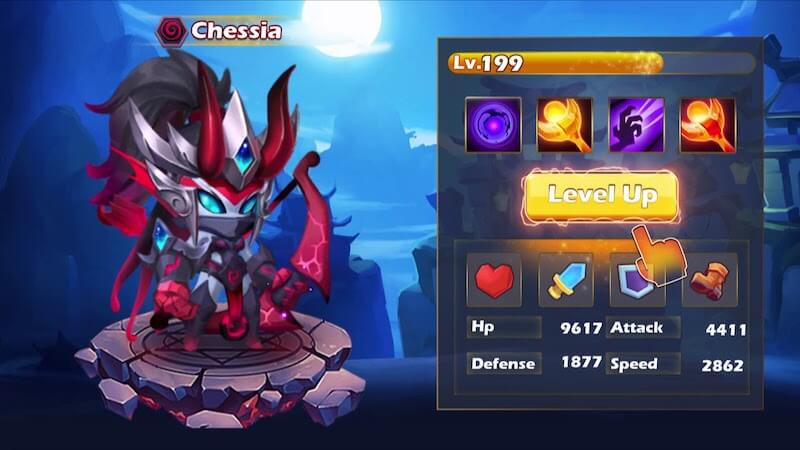 Freya has some high damage but her really big strength is her early petrifies and energy steals. She can be a real pain in pvp. Without TOTG she’s not fast enough to land her ccs on Shudde, Mars, Lindberg, Xexanoth, Verthandi or Luna, which are all great heroes, but she’s still amazing. With TOTG.. endgame mage. 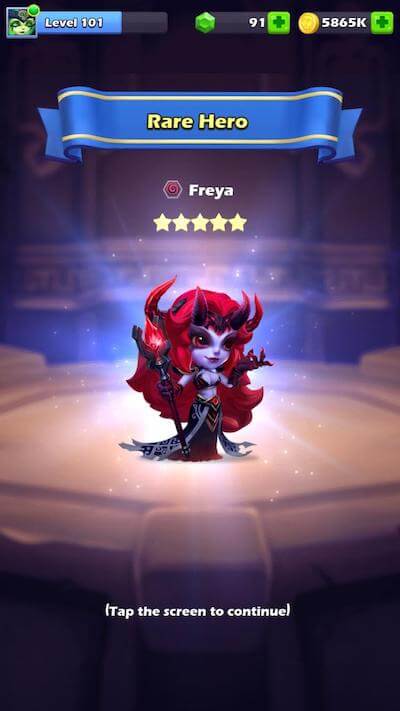 MK’s damage and survivability with his counter, skill and revive are outstanding. His damage is really among the highest. His petrifies are also a good asset. He’s a great hero but he misses speed or more ccs to be in the S tier.

Ultima’s survivability and damage are not great and he doesn’t do any cc to the opponents, but he increases the backline’s speed and attack and Celestial Opposition lets him turn the fight the other way around for 3 turns. Both are very valuable abilities that make him a very interesting hero in many cases.
However, the emergence of very strong cc-oriented heroes like Mars/Lindberg/Xexanoth combined with insane damage/healing outputs like Chessia/Aden/Shudde and an artifact that lets you use your skill on turn 1 no matter your speed (TOTG) makes me thing that the Ultima-based teams won’t be the ones dominating the pvp meta anymore, because speed isn’t as valuable anymore when the fight order is driven by TOTG.

Verthandi is a great tank. She can absorb damage while doing as much damage as top damage dealers and also healing a bit. She doesn’t care if her survavibility is low because she compensates with a big true damage team buff. Evasion rune is now weaker (because there’s no point in denying energy to the opponent when they start the fight with 100 energy with TOTG) so she prefers a speed rune instead to give an early true damage buff.

Luna’s damage reduction with her skill is so high that it makes her a great tank. She can deal nice damage and more importantly very dangerous early silences. Few tanks can compete with this damage and ccs.

Tesla has a lot of ccs, but his damage is really low. He’s still a nice support to have.

Aden deals nice damage and has a very nice survivability coming from his heals. Well-rounded hero.

Vegvisir is a one-of-a-kind tank. His survivability with Willpower Awakening is extremely high and he hits a lot of ccs along with some damage, even though a majority hit during later turns.

Grand is not gonna die early. His survivability is huge and he has nice damage and even a little healing and utility. His tankiness is even better than the other tanks and he will also deal more damage, more heals and give more utility. Very nice tank.

Scarlet has absolutely incredible damage per round. Unfortunately, they will be delayed over 3 turns and her survivability is super low so she won’t be able to cast her skill a lot. Plus, she’s slow. All in all, she’s a kamikaze damage dealer with outstanding damage who is strong but cannot hope to reach top tier in the current meta because she will be controlled. However, if you’re not facing early strong ccs like Mars, Lindberg or Luna, she might be as good as the top tier heroes.

Hester is surprisingly strong as a 10*. She lands some cc on the enemy backline but more importantly, she gives a big skill damage buff to her team, and with a speed rune she’s fast enough to do it before they use their skills. In the end, this increase the damage a lot.

Blood Tooth has average damage increasing during the fight and an interesting heal and attack drain, but he lacks more damage to be in the top.

NK deals high damage but he will want to have a TOTG equipped because he is slow and vulnerable to ccs so it’s a pain for him to have to wait until round 2 to use his skill because he is likely to be CCed at that time.

Wolf Rider has very low damage and survivability for a tank. He has some cc but that’s not really enough. If you need a tank and cannot get better ones or need a horde hero for the aura, he will still be more valuable than Minotaur or Abyss Lord thanks to his stun. The meta is really centered around stuns with Mars and Lindberg so if you have them his team bonus damage against stunned targets will be pretty cool, but if you don’t he probably won’t be great.

Centaur has big damage and an interesting ability to lower enemies’ speed, which is quite powerful if used on round 1 with TOTG, but without it he won’t be fast enough to make a good use of it. He’s a nice damage dealer but without the artifact he’s just ok.

Tiger King has very nice damage and survivability for a tank. He also has some utility. Nice tank.

Vivienne has very high healing and won’t die too soon thanks to Brave Song, but she will often be CCed because she is too slow. As a result she will use her skill later compared to Shudde, who is super fast (and also has much more damage and ccs).

Mulan shines in denying energy to the opponents with her dodges. Unfortunately, she doesn’t have much else and she will die sooner than other tanks. She is still a better tank than many and probably worth investing in if you need one.

Reaper has high damage his low survivability and speed won’t allow him to cast his skill twice, which is annoying because his damage increases significantly when his allies die. It’s the same as scarlet, he can perform as good as top tier heroes if you can keep him alive but he will have trouble against early ccs like Mars, Lindberg or Luna. Still a nice hero with his death skill, even against them. Also has a cool warrior silence.

Lexar has very interesting damage and a lot of self-healing, even though it is dragged down by his self-damage. He needs to be kept safe in the backline because he stays at low health, so avoid using him as a tank. His speed his low and he will often get CCed but he has a high potential if he doesn’t.

Ripper has a very good potential in both damage and ccs but he’s very vulnerable and really too slow. He needs a speed rune to release his skill at least once but very often he won’t even be able to do it. He’s as vulnerable as Scarlet, except he has no death skill to compensate and his Poison Nova isn’t strong enough compared to Scarlet’s Malefic. Plus, he really needs TOTG and will be even much worsea lot worse if he doesn’t have it. Probably a super good hero in pve though, where speed doesn’t matter because of the levels difference and where there are less ccs.

Xexanoth is a really great and particular tank. He doesn’t deal a lot of damage but his big strength is about stopping enemies from using their skills on round 2 with Weak Point Stealing when used as a tank. This will have a much weaker effect against enemies with TOTG though. Also has nice silences. Cannot be silenced by Shudde, Luna or himself, all of them appearing very often in the meta.

Sandship — mini-guide and few tips for beginners
We’ve never seen anything like it before this game.
0360 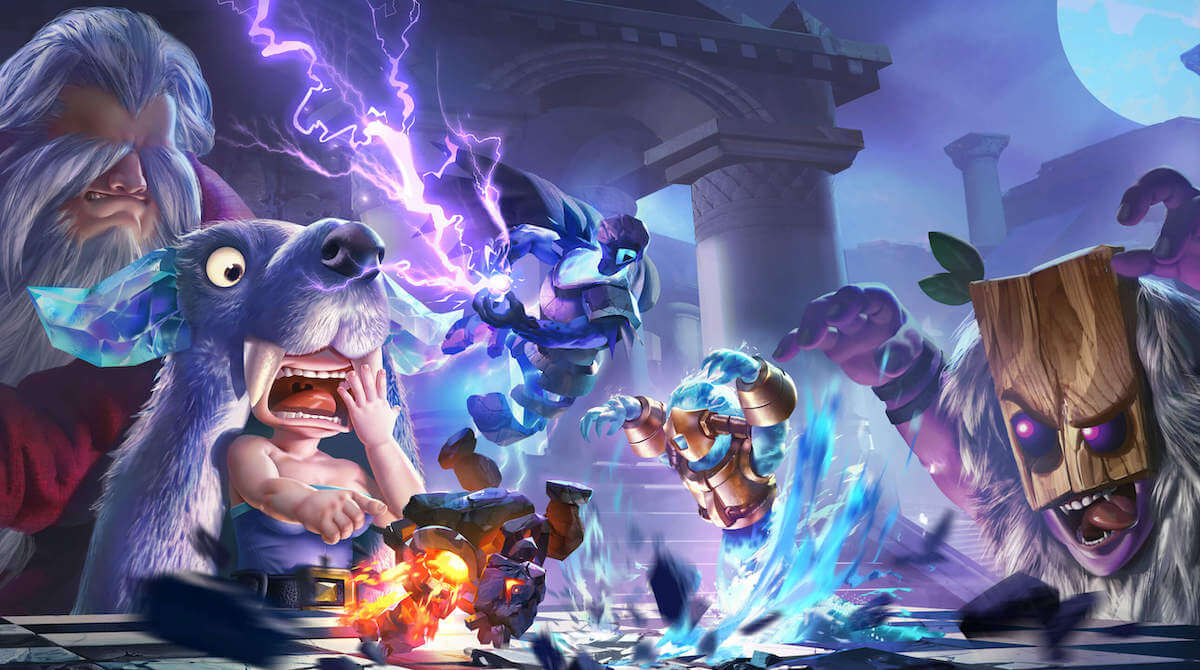 Auto Chess Mobile — Best Team Meta Compositions or Builds
Lots of people have been asking for a list of current
02.6k. 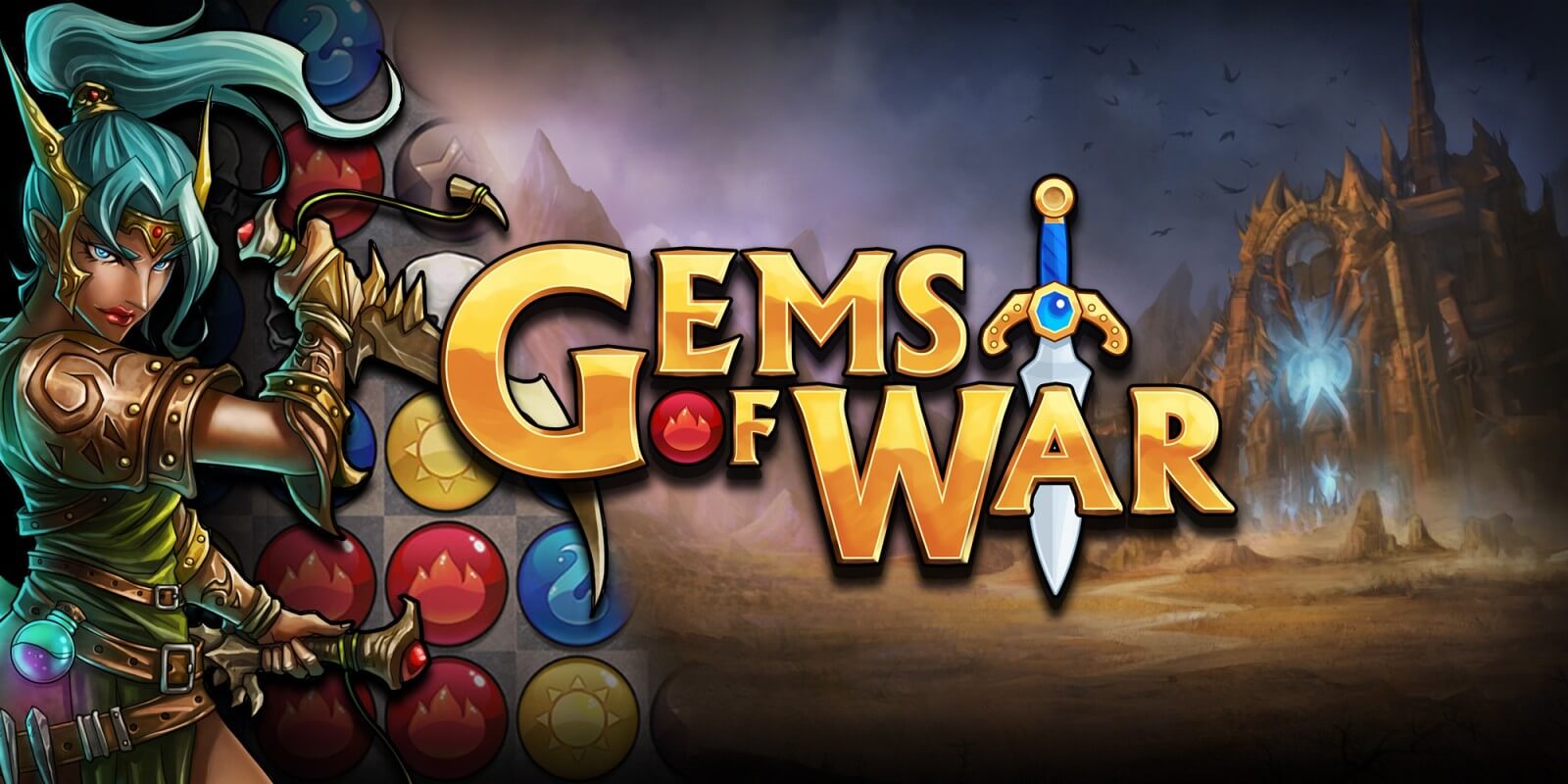 Gems of War — Legendary Tier List of Heroes by fans
In honor of the first non-faction Legendary to release
05.8k. 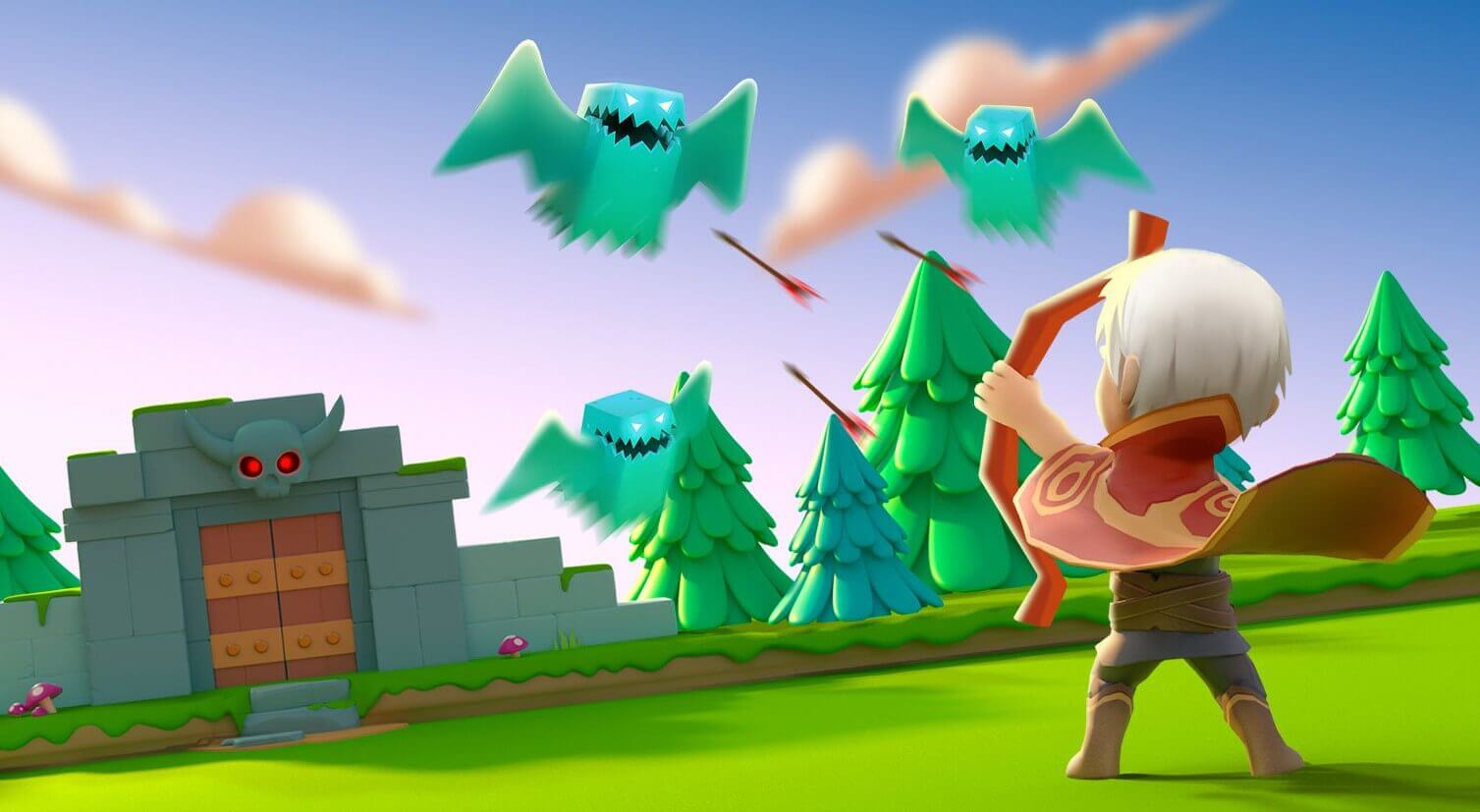 Archero — Basic and Weapon Guide, Tier List and Gem Farming Tips
Archero Guide of some basics aspects of the game Talents
013.4k.
wpDiscuz
This site uses cookies to store data. By continuing to use the site, you consent to work with these files.