Genshin Impact Secret War: How to unlock and complete the Vicious Battle Challenges 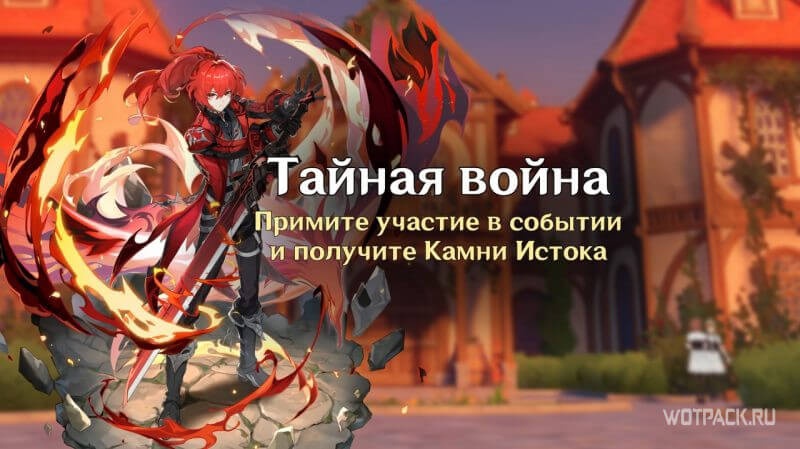 Detailed walkthrough of the event to get all the rewards.

Secret War in Genshin Impact is a Patch 2.8 event taking place in the Dawn Distillery. The traveler will have to go to Dilyuk's domain and learn about the threat from the past. Solve the hidden problem by completing the dungeon challenges and earn generous rewards.

In this guide, we'll show you how to participate in the event and complete the Secret War in Genshin Impact by completing the Vicious Battle Challenges on expert difficulty and Dead End mode.

Secret War Event will start on July 27 2022 at 12 pm Moscow time on the European server. The event will end on August 15.

How to start the Secret War event

To participate in the event dedicated to Dilyuk, you must fulfill the following requirements:

Make sure all conditions are met are met, and open the event menu. Click on the Go To Quest button in the lower right corner to start the Ghosts of the Past quest and find out what happened at Dawn Distillery. 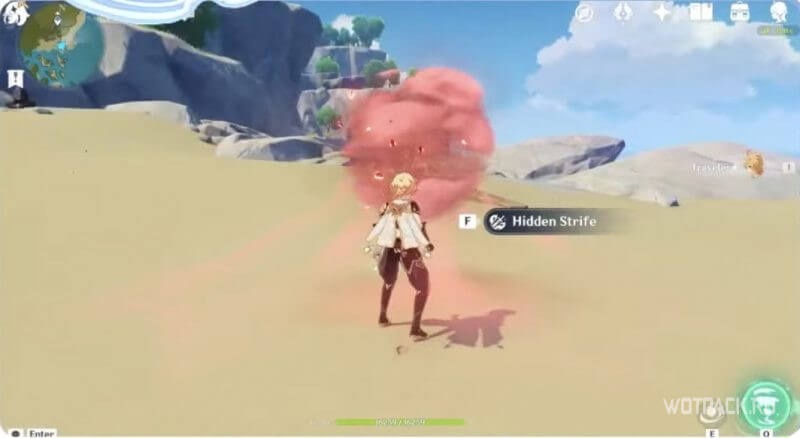 The Secret War event consists of 7 challengeswhich open one per day. Each of the battles has two modes: Vicious Battle and Dead End. Vicious Battle has three difficulty levels: Normal, Hard, and Expert. If you complete the challenge at a high level, rewards for easier ones will also be awarded. The Dead End mode is unlocked after beating Vicious Battle on Expert difficulty. 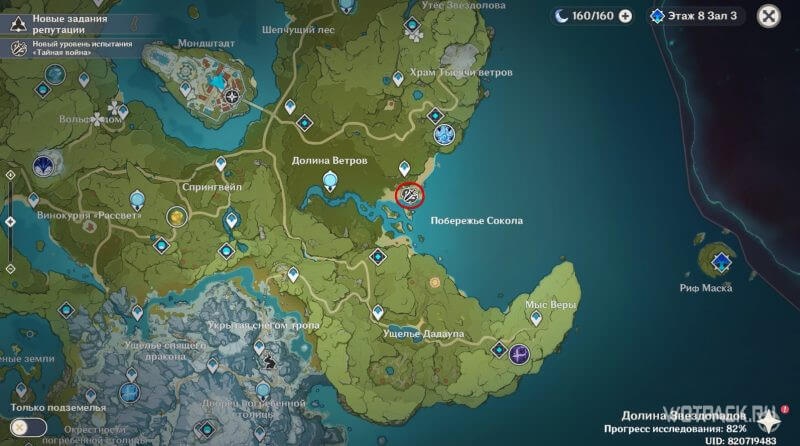 To begin the challenges, first complete the Ghosts of the Past quest, then teleport to the marker on if necessarycoast of the Falcon. Press the “F” button next to the anomalous earth artery to select a challenge.

In the control panel, you can see a list of available levels. Each contains a list of monsters and residual effect of the arteries of the earth, which you need to rely on when passing the test: this will simplify the task. The Dead End mode differs from the Vicious Battle in that the mobs are stronger here.

Ghosts of the Past Quest

First, you need to complete a small quest Ghosts of the Past. The task will appear in the journal automatically. To get started, head to the Rassvet Distillerythrough the nearest teleport. 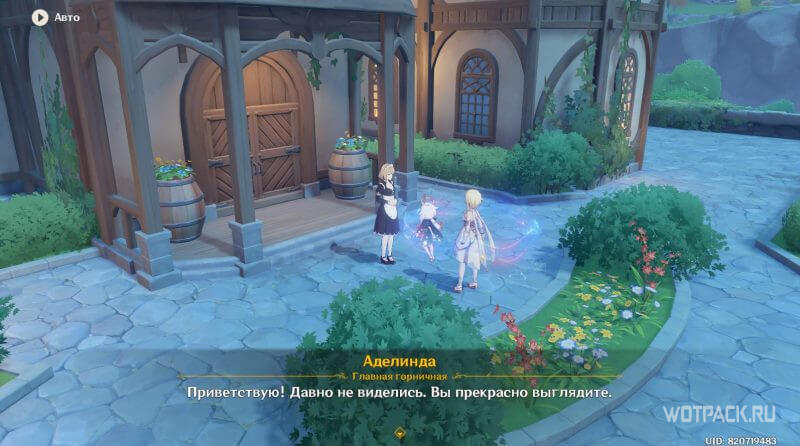 Approach the maid to start a dialogue. She will say that now Dilyuk is busy solving small problems, and will ask you to help him. You can find him on Falcon Coast. Paimon decides not to wait for Dilyuk at the distillery and suggests heading straight there.

Go to Falcon Coast to the quest marker. The desired spot is located near the teleport. 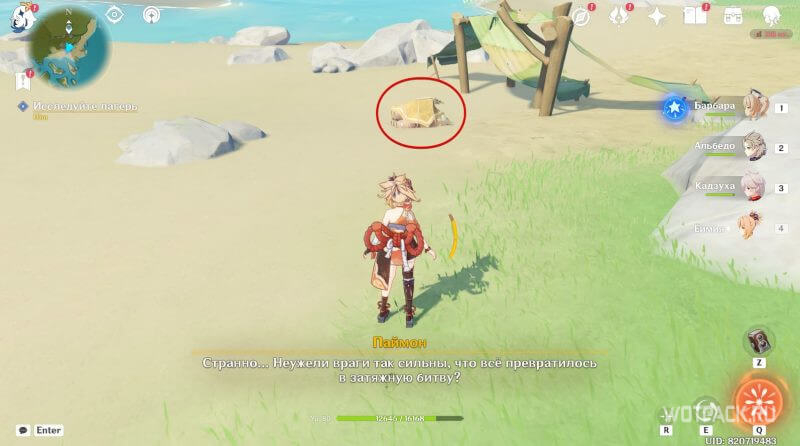 You can find a camp on site. Dilyuk himself is not here. Explore the camp to try and figure out what happened.

Paimon will find someone's notes in which the author refers to the Midnight Hero and reports that something strange has begun to happen to the arteries of the earth again. Now the monsters sealed inside are breaking out of them.

The first anomalous artery of the earth is located on the shore not far from the camp. Paimon will offer to study the notes in the camp, then it is better to investigate this phenomenon. There will be a hint in the text that Dilyuk turned to Albedo with a request to check the arteries of the earth. 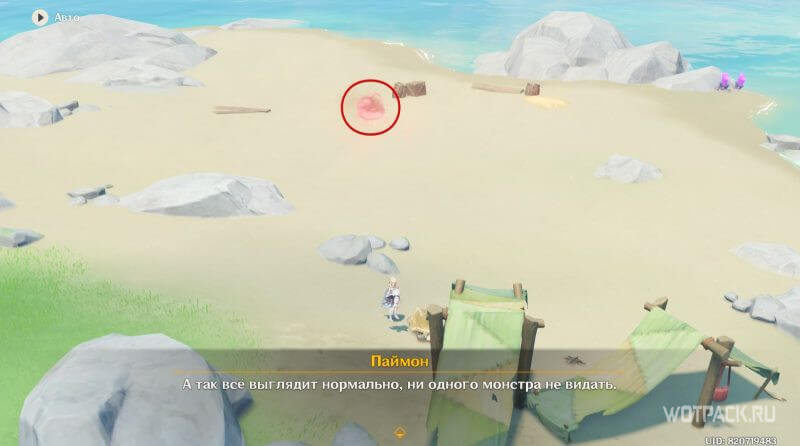 Approach the quest marker and investigate the anomalous congestion of the earth's arteries. A cutscene will activate, during which monsters will appear on the shore: hilichurls and the mage of the Abyss. Dilyuk will also teleport here, but he will look different than usual. It will become obvious that the artery of the earth simply shows the images that it captured earlier.

Dilyuk will be transferred under control. Kill 2 Hilichurls and a Void Cryo Mage. Be sure to use elemental skill to remove the elemental shield from the mob.

Paimon will offer to check the earth artery again and try to close the rift in reality. This will unlock the main part of the Secret War event. 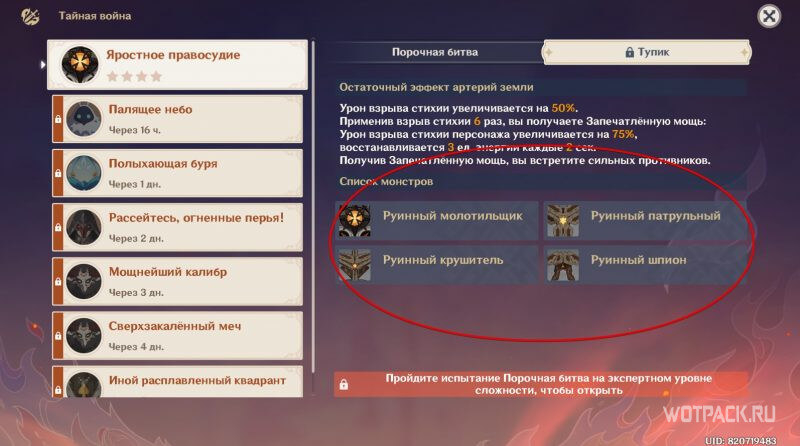 In this level, you have to defeat a group of automatons. Enemies include:

In Dead End mode, the Ruin Hunter is replaced by the Ruin Thresher.

The best characters for Furious Justice

Be sure to take archer, because some enemies are flying. A ranged attack can hit their weak spot and briefly incapacitate them to deal damage. It is advisable to include a support in the squad, as it will be problematic to pass Furious Justice without a heal or shields: opponents can take a lot of HP in one hit.

The best characters for the level include:< /p>

Example of a good group for Furious Justice — Raiden, Xing Qiu, Xiang Ling and Bennet. The archon will act as the main damage dealer. Xing Qiu and Xiang Ling will boost damage with elemental reactions and ultimates that continue to work even after switching characters. Bennett will fix the effect with a buff and heal the team.

Residual effect of the arteries of the earth in Furious Judgment

The level has passive Elemental Explosion Damage increased by 50%. After the 6th use of the ult, the effect Impressed Might is triggered. It additionally increases the damage from the ult by 75%, while also restoring 3 units of energy every 2 seconds. After receiving this effect, strong opponents appear. In Vicious Battle mode, Imprinted Power becomes available only 20 seconds after the start of the test, in Dead End this condition is not available.

To complete challenge you need to defeat 1 strong enemy – the Ruin Hunter. To do this, you need to activate the Imprinted Power effect by applying the ult 6 times. Timer limited 3 minutes, characters with short cooldowns will come in handy in the group. Be sure to switch between them and hit «Q» when you get the chance.

Most of the rewards are on normal difficulty, so even beginners can get Primogems.

3 mobs will immediately appear on the battlefield. After killing one of them, others will take his place. While the Imprinted Power effect is not working, you will have to fight with patrols, crushers and spies. 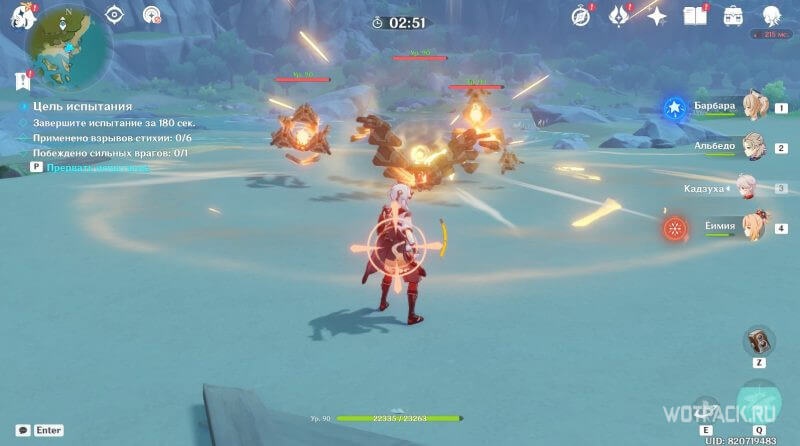 The main objective is to quickly charge and use ultsto summon a hunter to the battlefield. If possible, it is better to accumulate energy even before the start of the level, this will give a big head start. Damage in the first stage is not very important, because killing simple mobs is not a condition for passing the challenge. You can deactivate enemies by hitting cores to make it easier to accumulate energy for ults.

When fighting regular automatons, try not to stand in one place for a long time. They deal a lot of damage with area attacks and projectiles. If you see a zone outlined in red, exit it. Crushers can create a vacuum field by sucking the character into it. Be sure to avoid this attack: it does a lot of damage. Stay away from enemy spheres.

When Imprinted Might appears , focus on the Ruin Hunter: you need to kill him in the remaining time. Use against the mob elementalattacks: it absorbs half of the physical damage. In close combat, it is advisable to stay behind the automaton in order to receive less damage. Whenever possible, use ults that target elemental damage.

Once the hunter enters ranged mode, dodge missiles. Try to hit the archer's charged arrow on the coreto deactivate the mob and gain time to deal damage. In extreme cases, you can try to wait out the ranged attacks: after them the hunter will land, but it will take a long time, there is a risk of not meeting the timer.

How to get through the Dead End of Furious Justice

In Dead End mode, you need to defeat 2 strong enemies instead of 1. The timer has been reduced to 150 seconds. Be sure to charge your ultimates before the fight to have a slight advantage: the level is difficult.

The beginning is the same: 3 relatively weak mobs will spawn first. After activating Imprinted Might, threshers will start to emerge. They heal if there are other automatons on the battlefield, so it's best to quickly defeat them as soon as the boss shows up. It will take a lot of damage: you need a pumped and well-equipped squad with powerful ults and a high combination of elements to create elemental reactions.

To increase damage, it is advisable to use reactions Steam (Pyro + Hydro), Melting (Pyro+Cryo) and Overload (Electro+Pyro).

You don't have much time, so it's better to don't get distracted by dodges. To do this, deactivate the thresher by hitting the cannonballs in the legs and head. After that, he will not deal powerful attacks, and the rest of the damage can be taken with a support and completely focus on killing bosses. 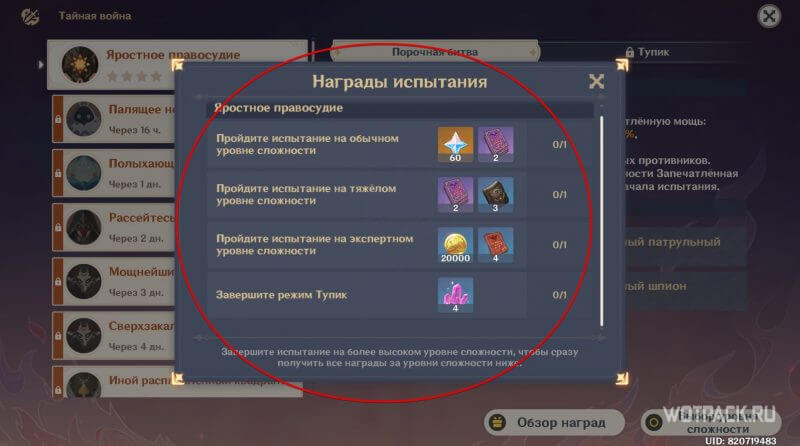 Completing all challenges will reward you with:

For completing the challenges of the Secret War event, players will receive:

Despite the fact that the five-star Scarlet Night costume is directly related to the event about the past of the owner of the distillery, it is not possible to get the Dilyuk skin for free. After the release of Genshin Impact 2.8, the new skin will have to be purchased from the Paimon Store for 2480 Genesis Crystals.

Please note that in Patch 2.8 the costume is discounted and costs 1980 crystals of creation. Also, don't forget about the opportunity to get the Fischl skin in the Dreamy Visions event.

Bookmark this page so you don't miss the detailed walkthrough of the event's challenges. Ask questions in the comments and follow the Genshin Impact guides on our website.

Genshin Impact: Sea Salt Covered Key – where to find and what it's for
Which doors the event item opens and where to find it.
027

Where to find all the characters in the Golden Apple Archipelago in Genshin Impact 2.8
Location on the map of all characters and topics for
024

Solving the monument puzzle on Dangerous Island in Genshin Impact
How to open both portals, complete the quest and get
0218

Sweet Dreams by the Sea in Genshin Impact: Correct Answers to Paimon's Questions
How to help Paimon remember her dreams and get all
021

Explanation of Dendro reactions and squads with new Dendro characters in Genshin Impact
In an accessible way and using examples, we talk about
012

Club of negotiations in Genshin Impact: who suits and how to get
Detailed guide to using the ⭐⭐⭐ sword with stats and
02

Monuments on Pudding Island in Genshin Impact: Electro, Anemo, Geo, and a fairy with a precious chest
Solving the puzzle with Electro, Anemo and Geo totems
04
wpDiscuz
This site uses cookies to store data. By continuing to use the site, you consent to work with these files.