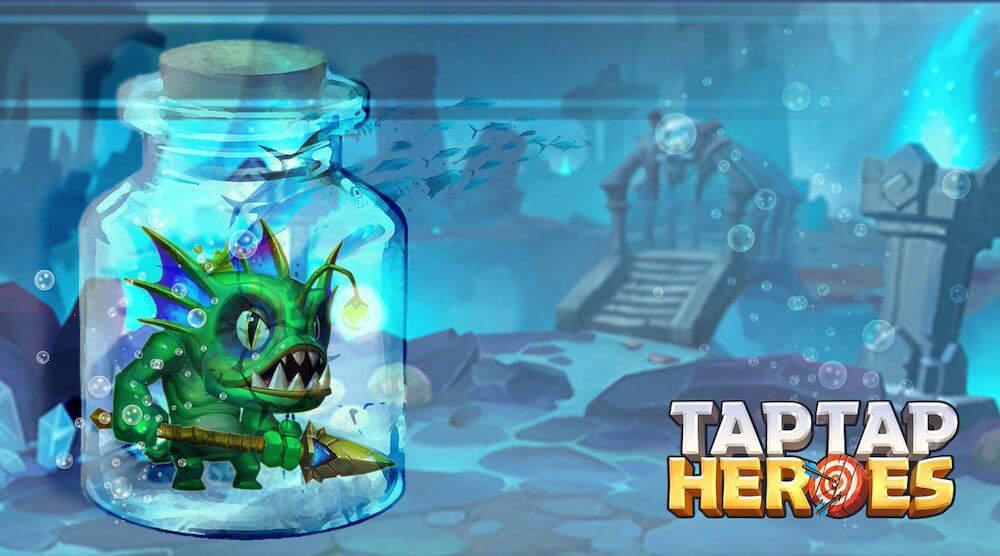 The best heroes in mobile game TapTap Heroes for 6-9 star Tier. List of heroes for the 10 star Tier. 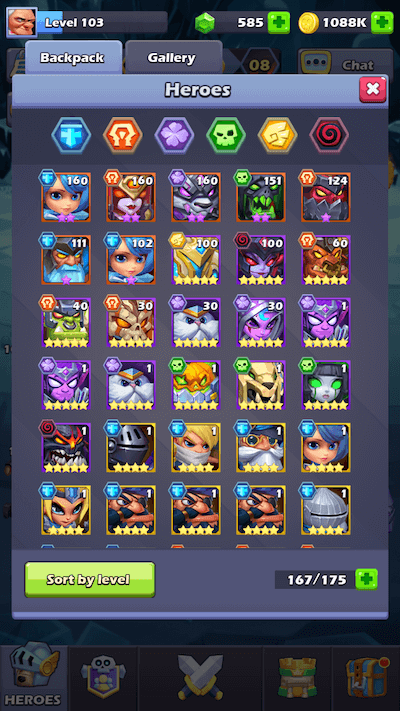 Paired with healer, if timed right healing him after his revive is game changing. Overall kind of an inconsistent hero ( Before 10 star).

Very strong early. Huge Heals, decent damage, and has CC against the best class in the game. Best Elf hero

2nd best Hero in the game

Freya is the second fastest hero in the game and also boasts above average stats in every other category besides armor. Freya utilizes an AOE skill and basic attacks to PETRIFY enemies, leaving enemy heroes useless for up to 2 turns.

Single Target Healer. With a high attack stat and 400% heal on lowest HP. Ryleh keeps herself alive. Ryleh is widely used for good reason, she is a tank.. Few downsides, like low speed and that she can only heal 1 person at a time,

She hits everyone and has great AoE with basic attacks. The real scary part here is the Silence. 50% chance for 2 turns. High Crit chance and Crit damage.

Medusa is the premier Horde Wanderer. Here stats are all great. Being able to stack critical chance while reducing the enemies is great utility on top of her amazing dps. Do not ignore her counter, it has proven to do a lot of damage.

Utility – no heal – cleric. Buffs allies / Debuffs enemies. Celestial Opposition skill is one of the best. Decent HP. While not a generally useful hero, on the right team he can be really good.

Nameless King… their is no substitute for this hero. He is arguably the best hero in the game. Boasting the number 1 power score, his combination of survivability, attack, crit, and speed are unmatched.

He has huge attack numbers and it increases in fights. Bringing a nice silence, a lot of damage to everyone, and even death damage, Reaper is probably the best general damage dealer. Reaper makes up for his weak armor with a great death skill.

Scarlet’s stats are not great… but her skills have high percentages and work together very well. Her damage is surprisingly high, because she is damaging all enemies over time. Overall, Scarlet is a unique mage with low end stats but still viable

Huge attack #s, but relies on enemies dying to get going. Has potential, but needs to stay alive.

Bleed hero with self heal. Stacking bleeds may be powerful in Friend/Guild boss. Will need to stay alive long enough to benefit from attack increase in PvP.

Needs ToTG, but with it. Can do insane damage from turn one.

Highest Attack. Can deal huge amounts out damage to enemy backlines and with an added chance to petrify, makes her first skill great. With each attack decreases dodge and with her increased hit, she is a nightmare for dodge reliant heroes

Great for PvE. Lots of stacking damage and a 2 round stun just for fun. His attack stat is extremely high, which will make his stacking DoTs do insane damage against guild/friend bosses.

Consistently high stats in every category, he is not to be taken lightly. Gerald does not do the most damage… but he compensates. With a 50% chance CC to stun up to 4 people per main skill, he will frustrate many enemies.

Centaur has above average stats in every category, and brings a LOT of damage! Centaur needs crit, as it poisons the enemy which increases his damage tremendously. Top DPS

Versatile hero who can be a great tank or decent backliner. Really low attack stat, so he relies on CC to be worth using as a backliner. Works well with teams that can stay alive as long as him!

The lower his health, the stronger he gets. Has a life steal mechanic so that he can stay at low health to do the most damage. Not good for PvE, but might be really strong in PvP.

Forest Healer is probably the elite team healer. gnoring the fact he brings little damage, he does the job of healing extremely well. Great healer (tip: focus on increasing his attack, as all his heals scale from it).

The Cleric Killer. The counter to best class in the game. On top of that, his other skills are great, giving more utility and attack.

Grand’s Armor steal is great. Permanent damage reduction (20%) is amazing. Solid tank for elves if you care more about skills/utility instead of straight stats

Reworked and defintely a lot stronger at 6 star

This guy is all about stunning, and adds decent damage too. Paired with Gerald… A tier.

Abyss Lord is tanky. 100% armor puts him above everyone else in armor when he reaches 30% health. This is the extra tanky version of minotaur but with less damage

Huge health pool and armor, with pretty decent speed too! His skills are average, but by reducing everyone’s armor break, he becomes very hard to kill with his high armor stat.

Tanky mage, who deals damage to the entire team. He has a ally and enemy death skill that makes him useful in almost every fight. Expect very high damage #s.

Minotaur has not only has the highest armor (by a lot!) in the game, but is also the premier warrior killer! He brings a lot of damage and can self heal (albiet its not much).

A mage’s worst nightmare. 80% chance to stun for 2 turns and an attack increase while below 50% hp.With a very high attack and speed stat. Against a team with multiple mages… A tier. Otherwise a solid hero.

Assassin poster child. High attack and speed; low health. All of his abilities do damage, so expect high dps. While there is nothing unique in his kit, he is reliable and fits the role of assassin perfectly.

Wolf Rider is an average tank. All his skills compliment his role to soak up damage and provide CC. His next best ability is damage reduction, but the 35% health threshold is kind of low. Although, against the right teams, he can do a lot of damage!

Stacking CRIT Rate and Damage. With her crit damage boost and crit chance gain she looks like a great assassin on paper… but her health and armor are holding her back.

Forren brings EVERYTHING. He has a decent heal, damage, and utility. His freeze can win fights on its own. He keeps your backline alive and gains attack as he loses health. His biggest issue is he will waste heals on those who do not need healing.

Her skill does decent damage, and her crit rate/damage is high. Targeting low health heroes is always great, but she does not bring enough damage to be considered a better option than other assassins.

This guy only burns. Low stats, low damage. Paired with Khalil, might move him up a tier. His Friend boss/guild boss damage is good, but requires team to be built around him to be used in PvP.

There are many heroes who stack stats. But Cursed One may be the most viable… He has great speed and health stats , backed up by skills with high percentages. He needs time to build up to 100% crit with 100% armor break.

Tankiest alliance hero. Extremely high armor stat, which is increased by Battlecry. Counter to teams with crit and low armor break. Lowest attack stat in the game, but compensates with a decent stun. Great tank!

His main skill does a lot of damage, and hurts mages. His biggest strength is “Fighting Spirit”, when combined with his high speed stat, it is possible he stops a key backline hero from being able to use their skill.

Sword master does some serious damage over time.He seems to be a reliable damage dealer, but nothing special.

Heal Over Time. Huge heal numbers over 3 turns. Great for teams with squishy backliners. SLOW!!! Will activate skill late. Check 9 star tier list, with guild tech and artifact, she is one of the best healers in the game!

Highest Health. Wolnir is a simply hero with a simple job… tanking. He takes a lot of damage due to his low armor stat for a tank, but has ways to deal with it through self healing through every stage of the fight. When something attacks, Wolnir heal.

Heaven Judge has average stats in every category besides attack, but the buffs for skill damage and true damage can add up very quickly. Heaven’s Judge stun does pair well with Gerald.

Dark judge separates himself from many other characters based on his energy steal. Whether he is attacked or he is the one doing the attacking he gains an extra 30 energy.

Khalil has potential to 1 shot entire teams. Unfortunately his defense is very low, with one of the lowest health and armor stats. Although, his death skill is very nice, giving his entire team A LOT of attack. (kind of like a budget ultima).

Half healer/half damage dealer. Fits into teams that already have a strong healer and dps. Slowest character in the game, and squishy. “Forest Scholar” boosts skills a lot. Megaw is OK.

Orphee has average stats at best but her last skill really helps her survive. The ability to heal everytime an enemy dies is amazing. Also her skill does damage to all backline enemies.

His only real skill that stands out his his attack steal, which sounds very nice, but his base stats cannot be ignored. He ranks lowest in Power and Health.Do not invest in this hero.

Guides 0 334 views
Excellent in hidden weapons, this girl, brought up in Bashu Region, with a crossbow

Tips 0 354 views
Witch or ranger for first character? Ranger is an all round god at basically

Tips 0 1,876 views
Lots of people have been asking for a list of current meta comps in

Tips 0 3,049 views
In honor of the first non-faction Legendary to release in a bit, here is

Guides 4 137,254 views
Some getting started tips for beginners Don’t click “complete” on any daily quest

Guides 0 615 views
KingsRoad is a free-to-play, browser-based, action RPG by Rumble Entertainment. It can be played

Guide for beginners: How to start well in AFK Arena

A detailed guide regarding Runes — Crush Them All
wpDiscuz
This site uses cookies to store data. By continuing to use the site, you consent to work with these files.