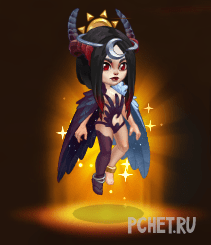 Celeste – A unique character by structure. She has very good abilities for both Arena, Campaign and Tower. The highlight of Celeste is that she activates her main ability already at 50% energy. Feels best in magic packs, but can be teamed up with physical ones as well. Excellent Character. In light form she is an excellent Healer, in dark form she deals huge damage from attacks.

Celeste spends 50% of her energy and switches back to light form. Repeated use of the ability switches Celeste back to dark form.
When switching to dark form Celeste creates a large area of Cursed Flame in the center of the enemy team. Enemies affected by Cursed Flame cannot receive treatment. When switching to light form, Celeste directs a large Sphere of Purification at the ally with the least health. The Purification Sphere restores the ally’s health for 5s.

Cursed Flame’s blocked cure now converts to magical damage on the same target, and the Purification Sphere cancels and blocks the negative effects applied to an ally during its action.

Tips on the Celeste

Two Fates is an excellent skill. Must be pumped. When switching to light form, throws a orb at an ally that restores health. When in dark form, throws an area that blocks healing.

Limb – Only pumped if you have extra gold.

The first to be swung is the Default Skin

for Intelligence. After him both guises are swung for Magical Attack:

is the last one to be swung since it is not a priority.

In the physical team symbol on Intelligence swings third, the symbol on the breakthrough protection from magic swings fourth.

In the magic team – as recommended above.

– It is mandatory and priority to pump the first artifact. You can pump it first in magic packs up to 6 stars. It gives +32040 Magic attack on full pumping. And taking into consideration the fact that it uses the ability at 50% energy, the artifact will trigger all the time, which greatly enhances your Magic pack.

– Swings after the first artifact, regardless of the pack.

– Swings after the second artifact.

Perfect mage for the campaign, for the Tower, for Outlands. Perfectly strengthens magic packs. In a pack with Orion can enhance it with an artifact, which will cause huge damage to the enemy team. Huge amount of pluses. Of the minuses is the difficult pumping stars for beginner players. In the late stage of the game will not be able to replace a full-fledged Healer, such as Martha, for example. There she already acts more as a Mage than as a Healer. Nevertheless, she can heal a tank just fine.

Marcus – Hero Wars
Marcus is another character in the game Chronicles of Chaos.
0293

Luthor – Hero Wars
Luthor is a good tank. Has a unique control ability
0175

Chubba – Hero Wars
Chubba is a good tank with control. Has a number of
080

Fox – Hero Wars
Fox is a peculiarly controlled shooter that requires
0124
wpDiscuz
This site uses cookies to store data. By continuing to use the site, you consent to work with these files.