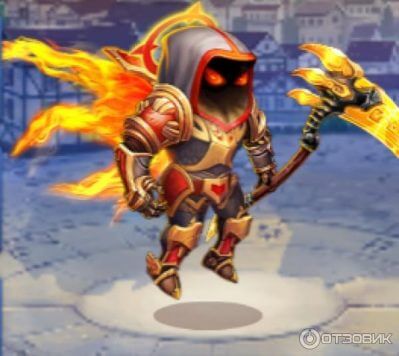 Astaroth is a great tank, one of the most popular and in demand in the game. There are a huge number of packs with him, which is proof of his versatility. Regardless of whether the pack is magical or physical, Astaroth fits in well with most of them. And his support skills are a great addition, which doesn’t stop him from playing his main role in any way.

Places a shield against physical damage on each team member

Passive skill. Astaroth bonds with the ally with the lowest health, carrying some of his physical damage.

Once per battle Astaroth resurrects a fallen ally or himself.

Tips on the Astaroth

In order not to waste gold (which will later be lacking) on unnecessary abilities, it is recommended to pump the following skills:

Flame Shield – Does not swing. The shield does not allow you to accumulate energy. The strength of the shield itself is enough for 1-2 hits. Useless ability that doesn’t cost gold.

Emptying – Swings at about the later stages of the game (closer to level 130). Not recommended to swing it until level 130.

The Last Word – Swings in Priority

is swung first for armor.

The second swings the Cybernetic Mode

Do not spend Stones of Power on the Demonic Cloak

Both of these guises give Astaroth an unnecessary Magical Attack, which is a minimal bonus. It does not justify itself in terms of cost. Roll them only when all the guises in the main packs are already pumped.

This symbol only swings when all the main characters of all packs are maxed. Like the skins, the symbol for Magical Attack gives too small an increase to the Astaroth.

– Swings to 3 stars, after that you should swing the second artifact. Swings last in the last turn.

– Swings in priority after the first artifact gets 3 stars.

– Swings after the second artifact.

Astaroth is a magnificent tank. In order for him to show himself to the maximum, it is imperative to get the Barbarian guise on armor. If you’re just starting to play Hero Wars, Astaroth is a great choice. He’ll do well in the Arena, Grand Arena, Campaign, and Tower. Absolutely versatile tank. The fact that you should not swing all the abilities at once, will only give you a plus in terms of gold.

Nebula – Hero Wars
Nebula is the perfect support character. It is the
013

Yasmin – Hero Wars
Yasmin is the perfect character to deal damage to.
018

Jhu – Hero Wars
Jhu is one of the most famous characters in the game. He’
023

Dorian – Hero Wars
Dorian is a Universal Healer, capable of standing in
021
wpDiscuz
This site uses cookies to store data. By continuing to use the site, you consent to work with these files.