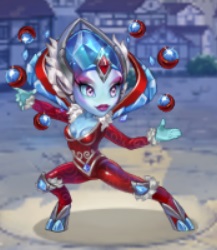 Nebula is the perfect support character. It is the kind of character that multiplies both the physical and magical attacks of your characters. Under her enhancement, your character can easily kill several enemy ones. An indispensable character in a pack where there are two, dealing a lot of damage, heroes.

Hero Wars – and tips for beginners

Launches a slow-moving projectile that, when activated, deals damage and dissipates energy to nearby enemies. Total damage and energy dissipated is divided equally between foes.

Nebula Restores health to two nearby allies and removes their buffs.

Deals damage to the opponent with the least health.

Nebula’s basic attacks will now switch to support mode. Each time Nebula is triggered, it increases Physical and Magic Attack to one of the neighboring allies for 5 seconds.

Tips on the Nebula

Astral Projection – It is recommended to pump if you have extra gold.

Serenity – Must be pumped.

Disharmony – Pumped last because of the weak effectiveness of this ability. Not recommended to pump until level 130.

for physical attack and the Winter Shape

is swung as follows.

is the last one to be swung, when all other guises of your main stack are already pumped.

– Swings simultaneously with the first artifact.

A great character that can greatly enhance your heroes, allowing you to do a huge amount of damage. In addition to damage, Nebula also strengthens Healers, allowing you to heal your pack better. Keep in mind that you can’t place characters like Jorgen next to Nebula. There should always be two characters that deal damage next to her. If you can pump Nebula, pick up 1-2 characters that deal a lot of damage and you won’t regret it.

Yasmin – Hero Wars
Yasmin is the perfect character to deal damage to.
019

Jhu – Hero Wars
Jhu is one of the most famous characters in the game. He’
026

Dorian – Hero Wars
Dorian is a Universal Healer, capable of standing in
022

Ishmael – Hero Wars
Ishmael is an excellent front line fighter.
015
wpDiscuz
This site uses cookies to store data. By continuing to use the site, you consent to work with these files.